Kate Swann, chief executive of high street retailer WH Smith, is known for her cost cuts – but profits are taking off. 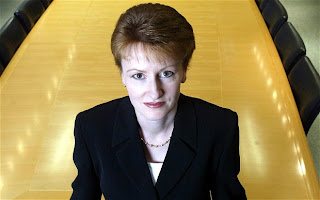 Left -Kate Swann, the WH Smith chief executive
By Jonathan Sibun in The Telegraph, 25 Apr 2011
Travel from Swindon to London on an anytime single rail fare today and you'll pay £54.50. But make the identical journey on two tickets, Swindon to Didcot and then on to London and you'll pay just £45, saving £9.50. This, it seems, is cost-cutting Kate Swann style.
I came to see the WH Smith chief executive expecting some insight into the 46-year old's success, but I hadn't envisaged this level of detail. The tip for travelling from the Smith's base in Wiltshire to its London HQ is just the latest ruse in a seven-year campaign to reduce costs in which Swann has transformed the company from a failing and flabby high street retailer into a lean, cash-generative business with a future.
The most recent evidence of that success came earlier this month when Smith's unveiled a 3pc rise in pre-tax profits to £64m in the six months to the end of February. Group revenues and like-for-like sales were once again on the wane but where Swann is concerned that's just part of the long-term plan.
Having taken over in late 2003, Swann has sold off assets, demerged distribution unit Smiths News, developed a travel business that now trades in eight countries, and all but moved the 1,100-store retailer out of entertainment products such as DVDs or computer games.
"When I joined I might not have looked that attractive to people, but the alternative was probably going out of business. It was a burning platform," recalls Swann. "The first few years were very tough. Having joined in November, there was an enormous profit warning in the January and then a takeover approach from Permira. But once we started to turn around the high street business and get some impetus behind travel, it became less firefighting and you could think further ahead."
Full piece including plans to open new stores at The Telegraph.
Posted by Beattie's Book Blog at 12:32 am