A large crowd braved the rainy Auckland weather to attend the launch by Peter Simpson of The Frame Function: An Inside-Out Guide to the Novels of Janet Frame, by Jan Cronin, published by Auckland University Press.

Many of Jan's students and colleagues from the English Department of the University of Auckland were in attendance, along with members of Auckland's literary community and more than a few Janet Frame enthusiasts. The crowd was entertained by a brilliant tribute poem from Selina Tusitala Marsh, aptly titled "Jan's Janet". 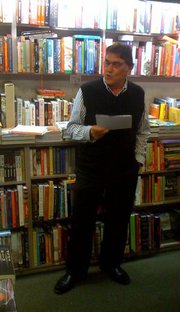 Here is Peter's address:
In some ways being head of a university department these days is an unenviable chore, but it does have its compensations, and for me one of these was the opportunity to be involved in the appointment of new staff. One of the happiest appointments to the English Department at The University of Auckland during my term as HOD was Jan Cronin whose first book The Frame Function we are celebrating the publication of tonight.
I first met Jan briefly at the University of Leeds in 2004 where I had gone to give a seminar on Kendrick Smithyman while on sabbatical. At that time she was in the last throes of completing her PhD on Janet Frame. I was immediately impressed by her and was delighted when the following year she put in for and was eventually appointed to a lectureship in Auckland. She has since become a Senior Lecturer. Jan immediately proved to be an excellent colleague and teacher as I know from sharing courses with her. Meticulous preparation, thoughtful and penetrating content, lively and engaging presentation with a dash of Irish charm all contributed to her impressive performance as a teacher.
I also had the experience of co-supervising a Frame PhD thesis with her, and found her to be a marvellous supervisor – thorough, exacting, helpful, encouraging – just what one wants in a supervisor. Jan published in rapid succession a series of excellent articles on Frame and other subjects (she is no one trick pony); last year she co-edited an important new collection of essays on Janet Frame called Frameworks by mostly younger scholars from around the world and she has now capped that with her own first book. It comes as no great surprise to me that she has done a brilliant job.

Reading Janet Frame, to adapt a quip of Bob Hope’s, is not for cissies. Some of her books are relatively easy going – Owls do Cry, Faces in the Water, A State of Siege, the posthumous Towards Another Summer, and of course the beloved autobiographies. But others are a tougher proposition.
You have to be well motivated and have mental stamina. I have to confess that there are still a couple I’ve never made it to the end of.
But the rewards for persistence are great. For me, Owls do Cry, A State of Siege and Living in the Maniototo are highlight s. Reading them is a bit like walking the Heaphy or the Routeburn Track. It takes days, it tests your mental fitness, but the rewards are huge and the sense of achievement on completing the job is exhilarating.
If reading Frame is a challenge, writing about her is something else again. It calls for the skills of the mental mountaineer. But just as difficult mountains have never wanted for eager climbers, so Frame has never wanted for willing writers. Hundreds have had a go and more than a dozen have completed the Himalayan-scale endeavour of writing whole books about her. It must partly have to do with what W.B. Yeats called “the fascination of what’s difficult”. I can’t claim to have read all these books, though I have read a few. Now we can add the intrepid Cronin to the list, but I’ll be very surprised if anyone has written a better book on Janet Frame than The Frame Function. It’s a cracker.
This book is no lumbering doctoral thesis stuck in the microwave to be warmed up. Nor is it just a bunch of singles put together to fill an album. It’s a completely fresh reading, building on previous work, of course, going back to her thesis of 8 years ago and the various articles published since 2005, but reworking them to fit the new context and extensive fresh research. That’s an impressive feature of the book; it’s what musicians talk about as being ‘through composed’. The chapters are not just a chronological trot through the major titles. For instance, she starts with a chapter on The Adaptable Man (Frame’s 5th novel) which she uses to set up her major paradigms and terminology. Then she works her way through all the major novels, sometimes pairing titles, Scented Gardens with Daughter Buffalo, for example, or Living in the Maniototo and Towards another Summer. She is constructing an argument not just taking a stroll past the monuments, and the argument is cumulative; terms and concepts are carried forward progressively; a bit like climbers on Everest setting up camps and consolidating before moving on to the next. This is helpful to the reader. The text is not easy. To quote the author herself: ‘It does not present “Janet Frame” in easy-to-swallow capsules.’ How could it given the subject matter? But Jan is a well-mannered and considerate guide. She puts fixed ropes in place; she repeats her key concepts over and over, like banging pitons into an ice face. (I seem to have caught the Frame disease of rampant metaphoricity!).

The Frame Function? What is it? How does it work? What does the subtitle, “An Inside-Out Guide to the Novels of Janet Frame’ mean? To really answer those questions you’ll have to read the whole book, and progressively and eventually it does all become clear. It has to do basically with explaining what sort of books Frame writes. Any fool can see that she does not write conventional novels – she herself referred to them as ‘nameless sort of books ’ – often to the despair of her publishers. Even the sympathetic American George Braziller blenched at a novel called The Carpathians which is set in small town New Zealand and doesn’t go within 10,000 kms of the Carpathians. So why on earth did she call it that? It all has to do, according to Jan, with Bram Stoker’s Dracula, believe it or not, being an example of one of those texts outside the novels on which Frame plays her sophisticated conceptual games. Others who fulfil this role in various books are Plato, St Augustine, Immanuel Kant, Rainer Maria Rilke, Anglo-Saxon poetry, the Book of Revelation and sundry others.
Instead of ‘novel’ with all the expected paraphernalia of plot, characters, setting and narrative continuity, Jan prefers the term ‘explorations’; the books are primarily an effort to explore some philosophical problem – the relationship between ‘object’ and ‘shadow’, for example, or ‘original’ and ‘copy’, and the conventional elements of plot and character are ‘staged’, in Jan’s term, only in so far as they facilitate such explorations. She isolates what she calls an ‘authorial presence’ in Frame’s books, prescriptive in character, which implicitly lays down rules for the reader to follow. But the books are never mere philosophical treatises, or guidebooks to how to treat the mentally ill (as Faces in the Water was once used in NZ hospitals), they all contain an ‘elusive’ quality.
As Jan writes, ‘My sense is that the prescriptive and elusive properties of Frame’s work are inextricably linked, not as oppositional and irreconcilable facets of the one text, but that they have a more intimate relationship; and this relationship is bound up in what I am terming the Frame function’.
There is much more to Jan’s argument than this. In analysing what she calls ‘Frame’s MO’, short for her authorial ‘modus operandi’, she argues that Frame tends more to be concerned with the ‘how’ of a text than the ‘what’ and that sometimes there is potential conflict between two within a text. But, hey, this is a book launch not a graduate seminar, and all these subtle issues are there for readers to explore for themselves. My task here is simply to celebrate a dazzling exegesis of a great writer, to congratulate AUP for taking on this important book, to urge you all to buy a copy and go on an unforgettable expedition to the fictional Himalayas in the company of a wonderfully helpful and intelligent guide.
Warm congratulations, Jan".
Posted by Beattie's Book Blog at 3:18 pm