Why Brick and Mortars Still Rule the Book World, and Why We Must Shop at Them Even If It Costs a Couple Extra Bucks and Few Extra Minutes 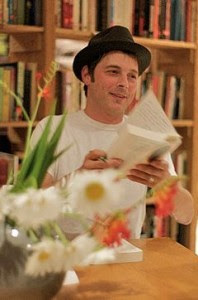 For years, on Bainbridge Island, there was this great little record store called the Glass Onion. The dude who owned it was named Jeff, and he loved his job. Basically, by buying a record store, he bought himself into a low paying job for life. Or so he thought. He was smart, passionate, and informed in a dizzyingly wide array of musical genres, and always managed to be on the cutting edge, without necessarily looking like a guy who lived on the cutting edge. Is this sounding familiar yet?
I’d go into the shop, and I’d say Jeff, what have you got for me? And he’d ask me what I was feeling like. And usually, I’d tell him nothing in particular. Surprise me. Jeff would hold court. He would preach music, he would champion artists exhaustively. People would be standing in line at the counter waiting for him to shut up, so he could ring them up. But even so, they’d be listening. We’d get a little history, some context, some good old fashioned subjectivity. And in the end, based on my conversation with Jeff, I’d walk out with great music. Rarely, did Jeff fail me, and even when I didn’t connect with a purchase, I always had a deeper appreciation for the music because of our conversation.

They tell me search engines can do this, too. But isn’t a search engine going to result in a somewhat one-sided conversation? If I like this, then I’ll like this. Don’t we lose something with the disappearance of that second voice? Without that conversation, I cringe to think of the music I might not have experienced.
Today, I’m still cringing at the thought of the music I may be missing, since Jeff closed his doors a few years back, because, well, music was mostly a digital affair. It’s cheaper, they say. You can get your product quicker, more conveniently, it won’t skip after repeated plays. You don’t have to buy a whole album. You can skip the parts you don’t want.

But what did we lose? In the past eight weeks, I’ve visited more than forty independent bookstores all over the continent, and every one of them had its own personality, and virtually every one of them was owned by an impassioned soul, who had bought themselves into a low paying job by buying bookstore. Oh, and virtually every one of them was a pillar of their community, who put their money right back into said community. And guess what else? All their employees were impassioned people, who happened to be local, and happened to like working for a low wage, if only because it allowed them to work around books, and to spread the word about books and authors, and none more so than the those who otherwise might fall under the radar, or the search engine.

Think about that the next time you click “buy” online to save a couple bucks. Ask yourself: what have I lost, what has my community lost, in the name of convenience? You wanna’ live in a town with wide boulevards, no sidewalks, and box stores on both sides? Then don’t spend your money at indiebookstores, or indie hardware stores, or indie grocery stores. Don’t seek out conversations. Just keep clicking and saving, and serving yourself in the name of convenience.

Full piece at Three Guys One Book.
Posted by Beattie's Book Blog at 7:04 am