Neill Atkinson has been appointed as Chief Historian at the Ministry for Culture and Heritage / Mānatu Taonga. 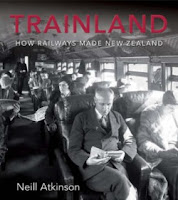 Well known for his work on transport, political and labour history, as well as on seafaring life, Atkinson is a graduate of the and has worked as a historian in government since the early 1990s. He is the author of six books, including Trainland, a social history of railways, and Hell or High Water, the story of 's Merchant Navy at war, and has also played a leading role in the development of NZHistory (www.NZHistory.net.nz) and other Manatū Taonga websites.
Lewis Holden, Chief Executive of Manatū Taonga, said the appointment comes at a time when New Zealanders are exploring their history in new and exciting ways.
“Our writers and historians are reaching wide numbers of New Zealanders with their creative approach to sharing our stories. Neill leads a team that produces some of our best history in digital and print media. His appointment confirms the government’s commitment to fostering greater understanding of this country’s complex past,” said Mr Holden.
The position of Chief Historian is one of national significance, overseeing the development of New Zealand’s official histories and other projects that help bring this country’s past alive. The appointment coincides with a large number of Ministry projects already underway to mark the upcoming centenary of the First World War.

“The First World War had an enormous impact on New Zealanders' lives - not just on the 100,000 who served overseas but also on those who stayed at home - and has left a lasting imprint on this country's landscape and collective memory,” said Mr Atkinson.


“We aim to present our First World War stories in imaginative, accessible ways in both print and web formats.”
The Ministry's flagship First World War project is due to be published by Penguin Books in 2013. This innovative, highly collectible history will be illustrated with photographs, posters and paintings and will include facsimile documents - envelopes, letters, diaries, booklet insertions, maps and artefacts - many of them never seen before.
As well as presenting a comprehensive online history of the war through the NZHistory website, Ministry historians are working on several other print projects, including an overview of New Zealand and the Western Front and a history of First World War heritage sites in New Zealand.
“New Zealand’s history is full of such rich material,” Mr Atkinson said. “I’m really looking forward to getting more of it out into the world.”
Ministry for Culture and Heritage history websites:
http://www.nzhistory.net.nz/
http://www.anzac.govt.nz/
http://www.teara.govt.nz/
http://www.28maoribattalion.org.nz/
http://www.vietnamwar.govt.nz/
Posted by Beattie's Book Blog at 12:02 pm