Why Shakespeare never fails to get brains buzzing 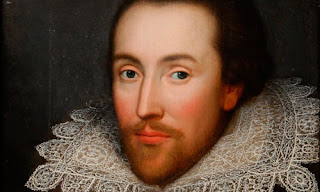 A painting of William Shakespeare, believed to be the only authentic image of the Bard made during his life. Photograph: Oli Scarff/Getty

Yesterday was Shakespeare's 447th anniversary. As with almost everything else about our national poet, this is disputed. All we can safely say is that he was born in Stratford, married, wrote or collaborated on about 40 plays, published some bestselling poetry, retired to Stratford, made a will and died, traditionally on his birthday in 1616, aged 52.
In contrast with this sketchy biography, Shakespeare's universal reputation as the greatest English writer – some say, greatest writer who ever lived – continues to resonate and inspire. Shakespeare plc goes from strength to strength. This spring has seen Derek Jacobi's King Lear, one of the finest in memory. The Merchant of Venice, with Patrick Stewart in the title role, opens in Stratford in May. The bardolatrous RSC is even mounting a production of Cardenio, the so-called "lost" Shakespeare play from 1613.
What's his secret? You can invoke a higher power for the astounding universality of his work, but that won't do, especially for anti-Stratfordians.
If I had to sell Shakespeare to a class of refuseniks I'd focus on three essentials that separate him from almost every other literary writer.
First, he lived in the real world, and took risks. No ivory tower or festival circuit for Shakespeare. His plays were written in the shadow of the gibbet and the scaffold. When Essex attempted a coup against Queen Elizabeth in 1601, Shakespeare and the Chamberlain's Men sanctioned a performance of Richard II, the great deposition play, supporting the reckless earl. Aesthetically, too, he was bold. As Stephen Greenblatt shows in Will in the World, the "To be or not to be" of Hamlet transforms English drama with "an unprecedented representation of tormented inwardness".

Second, like many geniuses, he seems always to have been at work. In one memorable year, 1599, he surpassed himself with Henry V, Julius Caesar, As You Like It, several sonnets, and the first draft of Hamlet. Shakespeare was impossibly gifted, but he amply repaid his blessings and never took his gifts for granted.

Finally, stylistically, he had the luck to be born at the confluence of the English renaissance, the aftermath of the Reformation, and the first golden age of the press. In his own phrase, he was "a man of fire-new words". Hamlet, for example, is simply crammed with innovation: some 600 words that were new to the written record of the English language.

As much as plot and character, it's Shakespeare's language that enthrals. Partly, it's the precision of his observation, drawn from ordinary life. As the son of a leather merchant, he can have Feste joke that "a sentence is but a cheveril glove to a good wit, how quickly the wrong side may be turned outward". A Midsummer Night's Dream, ostensibly set in a wood outside Athens, could only have been written by a Midlands country boy.
The magic that Shakespeare works with language is a commonplace of literary commentary, but it also answers to neurological analysis. Since 2006, Professor Philip Davis of Liverpool University has been studying the effects of Shakespeare on the human brain.

Using EEG and fMRI scanning techniques, Davis has been testing individual responses to some of the playwright's most daring innovations. "I had an intuition," he says, "that functional shifts of syntax in Shakespeare might have an impact on the pathways of the brain, which is an extraordinary internal theatre."
Davis will take a sentence, for example Albany's charge to Goneril in King Lear: "A father, and a gracious aged man... have you madded." This is an ungrammatical, highly energised compression. MRI scans suggest that it evokes a powerful neurological response. In the words of his collaborator Dr Guillaume Thierry: "The Shakespearean functional shift appears to prompt activation in the visual association cortex, ie in regions normally activated by visualisation; that is, the mind's eye."