‘William & Catherine: Their Lives; Their Wedding’

Bookreps NZ Ltd is excited to have secured the rights to distribute in New Zealand what will be the definitive story of the Royal Wedding. 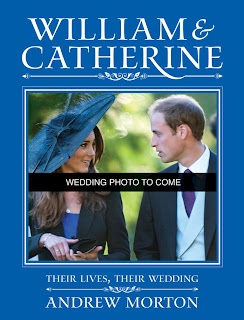 ‘William &Catherine: Their Lives; Their Wedding’ by Andrew Morton will be airfreighted to New Zealand direct from the European printers to enable it to be released here on or before 13 May 2011 - only two weeks after the wedding.

Andrew Morton is one of the most informed and in demand commentators on Royal affairs in the world.  With his unrivalled contacts and sought-after insight, ‘William and Catherine’ will be the essential publication on this very modern Royal wedding.

The book will include exclusive interviews and unpublished photographs and will feature a cover image of the couple on their big day.   Illustrated with more than 150 colour photos and 32 pages of wedding coverage, it will be a handsomely produced hardback, weighing in close to a kilogram.

Although publicly known as Kate it is Catherine that Miss Middleton was called when the engagement was announced. The book’s title reflects this, and the fact that when William is crowned she will become the sixth Queen Catherine in England’s history.

No partnership equals the royal-title track record of UK based Michael O´Mara Books and Andrew Morton, the publisher and author of the sensational international bestseller 'Diana: Her True Story', the biography that sold over 1.5 million copies worldwide.

"The nuptials of the English royal family´s most popular and glamorous couple are sure to be essential viewing - not just for England, but for the entire world - and this book will be a stunning record of what may well prove to be a turning point in the history of the British royal family," said Andrew Morton.

‘William & Catherine’ will examine the couple’s families and backgrounds, their lives before they met and the story of their relationship from its earliest days, their private engagement, preparations for the event of the year, and a section on the wedding itself.

Prince William and his new bride Catherine will be back in New Zealand in October on their much publicised private visit to attend the Rugby World Cup.