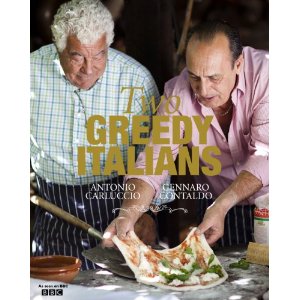 Over 30 years ago Antonio Carluccio and Gennaro Contaldo separately left their native for where, in time, they met, worked together and established themselves as leading authorities on Italian cooking. In this unmissable book – written to accompany the primetime BBC TV series – the two old friends have embarked upon an amazing journey back to their homeland in order to reconnect with their culinary heritage, to explore past and current traditions and to reveal the very soul of Italian gastronomy.


Containing over 100 mouthwatering recipes, this fascinating book goes beyond the clichés to reveal real Italian food, as cooked by real Italians. It includes an intriguing combination of classic dishes and ingredients as well as others showcasing the changes in style and influences that have become a part of the of today. Reflecting the insights of both men into then and now, Two Greedy Italians captures the essence of its authors – their humour, their wisdom, their curiosity and, most significantly, their shared passion for good, simple food. It is an essential book for anyone with a genuine interest in Italian food.
About the authors:
ANTONIO CARLUCCIO is one of ’s great food ambassadors. He has written thirteen bestselling books, including Complete Italian Food, Complete Mushroom Book, Italia and Simple Cooking and ha also made numerous television programmes. Antonio ran the Neal Street Restaurant in ’s and spent 10 years developing the hugely successful Carluccio’s Caffes. In 1998 Antonio was appointed Commendatore, the equivalent of a British knighthood, for his knowledge, enthusiasm and lifetime’s service to the Italian food industry, and in 2007 he received the O.B.E.
GENNARO CONTALDO is a highly respected chef in as well as a renowned personality in his own right. He is widely known as the Italian legend who taught Jamie Oliver all he knows about Italian cooking. Born in Minori on the Amalfi Coast, Gennaro’s quintessentially Italian spirit and positive nature ahs made him a TV favourite, regularly appearing on BBC’s Saturday Kitchen, He has written four cookbooks – of which Passione was awarded Best Italian Cookbook at the World Gourmand Awards in2004 – and has worked in some of London’s most popular restaurants.
The Bookman has made two recipes from the book so far and the publishers have kindly agreed to allow me to reproduce them on the blog:
SPAGHETTI CRUDAIOLA
Spaghetti with Raw Tomatoes and Peppers 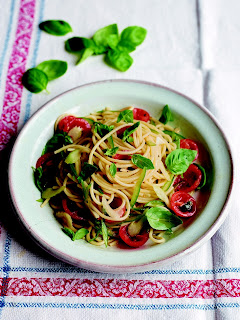 400g spaghetti
salt
Sauce
240g cherry tomatoes, halved and deseeded
3 small sweet green peppers,finely sliced
1 tsp capers
1 small tender celery stalk, finely chopped
10 basil leaves, roughly torn, plus extra to garnish
a pinch of dried oregano
1 large garlic clove, finely chopped
125ml extra virgin olive oil
Serves 4
This is a simple pasta dish, perfect for easy entertaining, which
is usually made in the summer in using the season’s best
tomatoes. The sauce is raw – with the tomatoes left to marinate in
good extra virgin olive oil – and can also be used to top crostini.
For the sauce, combine all the ingredients in a bowl, cover with a lid
or foil and leave to marinate in the fridge for at least a couple of hours.
You can leave the sauce overnight to develop a more intense flavour,
but not longer.
When you are ready to use, remove the sauce from the fridge, check
the seasoning, then set aside.
Bring a large saucepan of lightly salted water to the boil, add the
spaghetti and cook until al dente. Drain the spaghetti, toss with the
sauce and serve immediately, garnished with some basil leaves.
PATATE ARAGANATE
Sliced Roasted Potatoes with Tomato, Oregano and Basil 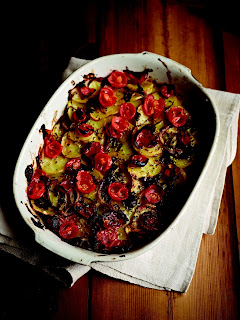 7 tbsp extra virgin olive oil
500g potatoes, thinly sliced
1 tsp dried oregano
salt and freshly ground black pepper
a large handful of basil leaves,roughly torn
300g red onions, sliced
400g cherry tomatoes, halved and deseeded
1 tbsp white wine
Serves 4
This is a wonderful accompaniment to meat or fish dishes, and,
if you increase the quantities, makes a lovely main course in itself
when served with a salad. Arraganate means ‘with oregano’, and
this herb infuses wonderfully with the potatoes and tomatoes
during roasting. Whenever I make this dish the whole house is filled
with a wonderful aroma of oregano and basil, transporting me
right back to the .
Preheat the oven to 180°C/Gas 4.
Pour 3 tablespoons of the olive oil into an ovenproof dish or roasting
tin. Arrange a layer of the potatoes, sprinkle over a little of the oregano, season with salt and pepper and scatter over some basil leaves. Follow with a layer of onions and tomatoes and a drizzle of the remaining olive oil. Continue with another layer of potatoes and repeat the process until all the vegetables have been added to the dish.
Pour over the remaining olive oil and white wine.
Cover with foil and bake in the oven for 45 minutes. Remove the
foil and loosen the potatoes from the bottom of the dish with a fork,
taking care not to break them. Continue to bake for a further 15–20
minutes, until the potatoes are cooked through. Serve immediately.
Both recipes extracted from Two Greedy Italians
Text copyright © Antonio Carluccio, Gennaro Contaldo
Photos copyright © 2011 Chris Teddy
RRP $45.00   HB
Published by Quadrille
Distributed by Southern Publishers Group
Posted by Beattie's Book Blog at 1:07 am