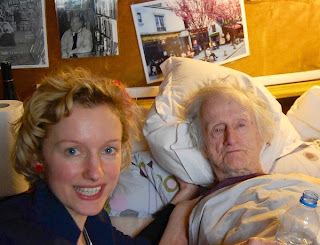 Sylvia Whitman gave up her ambitions in order to manage her father's iconic Paris bookstore, stitching together their frayed ties and bringing the shop into the 21st century.
Photo - Sylvia Whitman and her father, George, are in his room above the Shakespeare and Company bookshop in Paris. (For The Times, Devorah Lauter / April 22, 2011)
Reporting from Paris—  By Devorah Lauter, Los Angeles Times


They used to catch glimpses of him shuffling among the stacks in his English-language bookshop facing Notre Dame Cathedral, the white-haired Shakespearean king revered and feared by his subjects, who depended on him to avoid a train ride home, or worse, a job.
They would get to know George Whitman's spitfire wit, unpredictable temper and unending generosity after sleeping in his shop, where he has put up thousands of struggling writers and wandering youths in the 60 years since he opened Shakespeare and Company.

He was the kind of man who never spent a cent on himself; he'd light his hair on fire with a candle because it was a cheap way to get a trim. (He occasionally used the technique on customers, whether or not they knew what was coming.)
He's such a legend that it's no wonder a lot of customers at the bookshop on Rue de la Bucherie ask whether Whitman, an American born in 1913, is still alive. (More on that later.)
And they wonder whatever happened to the little daughter he used to carry on his shoulders through warmly lighted narrow nooks or leave sitting in the shop window with the cat.

Sylvia Whitman, a 30-year-old with a ready smile and a fairy-blond crop of curls, likes telling about the occasional customer who inquires whether the proprietor's daughter is alive, doubtful she could have survived a childhood spent in a "very beatnik" Shakespeare and Company frequented by the likes of Allen Ginsberg and William Burroughs.

Sylvia left that world behind at age 7 with her mother and became estranged from her father. But now, a kind of Cordelia to Whitman's King Lear, she has fallen for him and the store.

"When I got here, I was so kind of blown away by him," she says. "He's such an eccentric character, interesting but also so terrifying in a way.... And I really wanted to have a relationship with him."

She gave up her ambition to be an actress to take on the management of the bookstore, bringing the shop into the 21st century while being true to its bohemian roots.
Inspired by Sylvia Beach's early 20th century bookshop of the same name where writers such as Hemingway hung out, Whitman's version is a fitting sequel to Beach's era.

Curling photos of Shakespeare and Company habitues decorate crooked, aging walls. From unpublished poets to drunken literary enthusiasts to a French railway worker, many slept on the makeshift beds squeezed between shelves of musty books.
Full piece at LA Times.
Posted by Beattie's Book Blog at 8:20 am