We’ve collected the hardcover books debuting on Indiebound’s Indie Bestseller List for the week ending April 24, 2011–a sneak peek at the books everybody will be talking about next month.

(Debuted at #2) The Emperor of Nihon-Ja by John Flanagan: Book 10 in The Ranger’s Apprentice series. “Months have passed since Horace departed for the eastern nation of Nihon-Ja on a vital mission. Having received no communication from him, his friends fear the worst. Unwilling to wait a second longer, Alyss, Evanlyn, and Will leave their homeland behind and venture into an exotic land in search of their missing friend.” (April 2011) 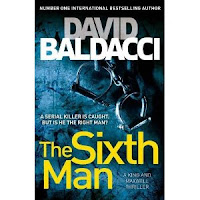 (Debuted at #8) The Sixth Man by David Baldacci: “Edgar Roy-an alleged serial killer held in a secure, fortress-like Federal Supermax facility-is awaiting trial. He faces almost certain conviction. Sean King and Michelle Maxwell are called in by Roy’s attorney, Sean’s old friend and mentor Ted Bergin, to help work the case. But their investigation is derailed before it begins-en route to their first meeting with Bergin, Sean and Michelle find him murdered.” (April 2011)

(Debuted at #10) My Father’s Daughter by Gwyneth Paltrow: “The Academy-Award winning actress and avid foodie shares a sumptuous collection of recipes and gorgeous photographs celebrating the joy of preparing food for loved ones, a passion she learned from her beloved father.” (April 2011)
Posted by Beattie's Book Blog at 8:22 am