For admirers of Nigella Lawson's Rubenesque curves, the prospect of the domestic goddess hitting the beach was one to savour.

Nigella was covered head to toe in a burqini Photo: MATRIX 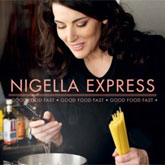 So her choice of swimwear for a dip off Sydney's Bondi Beach came as something of a surprise. Rather than a revealing swimming costume, Miss Lawson was covered head to toe in a burkini, the modesty-saving outfit designed for Muslim women.
The 51-year-old cut a striking figure as she splashed in the surf with her friend, comedian Maria McErlane. While Miss McErlane wore a skimpy bikini, Miss Lawson was protected from the elements in a black two-piece and peaked cap, leaving only her hands, feet and face showing.
Rather than a sudden conversion to Islam, her choice of outfit was motivated by a desire to shield her creamy complexion from the Australian sun. "Nigella was protecting herself from sunburn, nothing more than that," said her spokesman.
More at The Telegraph.
Posted by Beattie's Book Blog at 6:23 am