Three Cups of Tea -- and 4 Other Big Book Scandals

by Lindsay Powers , The Hollywood Reporter

Greg Mortenson's memoir isn't the only tome that has come under fire in recent years. 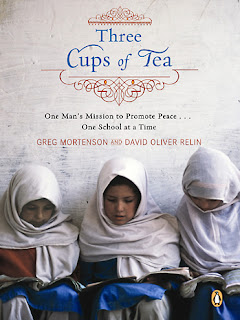 With Greg Mortenson's memoir Three Cups of Tea under fire, The Hollywood Reporter looks back on the five biggest book scandals.

1. Three Cups of Tea: On Sunday, 60 Minutes called into question a main anecdote in the book: that Mortenson found himself in a small village named Korphe in northeast Pakistan after he failed to climb the world's second-highest mountain nearby, K2. After villagers helped him recover from his doomed climb, Mortenson said he was inspired to return to the town and build a school. Mortenson defends his book, but admits it was a "compressed version of events."

2. A Million Little Pieces: James Frey's memoir -- in which he detailed his drug addiction and supposed girlfriend's suicide -- was endorsed by Oprah Winfrey's book club, causing it to shoot up the New York Times' bestseller list and become Amazon's No. 1 seller. The Smoking Gun Web site disproved the book in an article called "A Million Little Lies," causing Frey's publisher to release an apology -- and Winfrey to yell at him on her show.

3. J.T. LeRoy: Former drug addict, one-time prostitute and drag queen Jeremiah "Terminator" LeRoy wrote several critically acclaimed fiction novels: Sarah, The Heart Is Deceitful Above All Things, Harold's End and Labour. He was also profiled in the New York Times and other publications -- until New York magazine exposed LeRoy as a fake created by Laura Albert and Geoffery Knoop. Knoop's half sister, Savannah, would dress as LeRoy for public appearances.

4. Education of Little Tree: Pitched initially as a "true story," the book was on classroom reading lists and Oprah praised it on TV. The writer's cousin Dan Carter, a prize-winning historian exposed the author as a former Klansman. Oprah repudiated it in 1994 but it popped up again on her website in 2007 as recommended book before someone caught it.

5. Love and Consequences: The memoir was supposedly by a part Native American Los Angeles girl named Margaret B. Jones who was sent to foster care after being sexually abused. She then fell in with the Bloods gang, and was given a gun for her 14th birthday -- until she was saved by a black foster mother she called Big Mom. Turns out her real name was Margaret Seltzer, she was white, and was raised in comfortable Sherman Oaks, Calif. Her sister, Cyndi Hoffman, exposed her after reading a profile of her in the New York Times.
Posted by Beattie's Book Blog at 6:34 am