Publisher of ‘Three Cups of Tea’ to Conduct Review

By JULIE BOSMAN in The New York Times 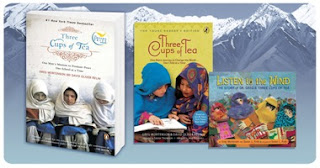 Viking, the publisher of “Three Cups of Tea,” said in a statement on Monday that it would review the book and its contents with the author, Greg Mortenson, after a CBS News report that called into question the accuracy of part of the book.
Mr. Mortenson’s memoir, an account of his work building schools in Pakistan and Afghanistan, has sold millions of copies.
“Greg Mortenson’s work as a humanitarian in Afghanistan and Pakistan has provided tens of thousands of children with an education,” Carolyn Coleburn, a spokeswoman for Viking, said in a statement. “ ‘60 Minutes’ is a serious news organization and in the wake of their report, Viking plans to carefully review the materials with the author.”
The statement was a strong signal that Viking, an imprint of Penguin, is not convinced of the accuracy of Mr. Mortenson’s book. In several high-profile cases in recent years, publishers of nonfiction have been forced to retract or apologize for memoirs that have been found to be partially or totally fabricated.
A report on “60 Minutes” on Sunday questioned a central anecdote of “Three Cups of Tea”: in 1993, Mr. Mortenson stumbled across the small village of Korphe in northeast Pakistan after failing to summit K2, the world’s second-highest mountain. Mr. Mortenson wrote in the book that after the villagers there nursed him back to health, he vowed to return and build a school.
Mr. Mortenson has defended the information in the book, but has also said that it was based on a “compressed version of events.”
The CBS report also suggested that Mr. Mortenson’s charitable organization, the Central Asia Institute, was plagued by mismanagement and inappropriate spending.
Posted by Beattie's Book Blog at 6:27 am