When God Was A Rabbit 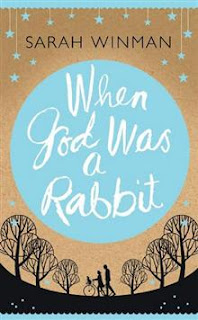 There seems to be some sort of contest going on among authors at the moment to see who can come up with the most ridiculous title for their book. For the record God is the name the narrator of this debut novel gives her pet rabbit. The title does at least set the tone for a story that is ridiculous at times, but also eccentric, hilarious and brave.


Winman is a British actress who, if this first outing is anything to go by, has a big future as a novelist. She tells this coming of age story in two parts. It begins with Elly’s account of growing up in 1970s London. While her close family is a loving one, there is evil and darkness pressing in from the outside world.
Elly is molested by a mentally-ill Jewish violinist neighbour who then goes on to kill himself. Her best friend Jenny Penny has a tarty Mum and a series of “uncles”, her own mother is half in love with her gay aunt, her lawyer father is having a breakdown, her brother is coming to terms with his sexuality. Things are complicated in Elly’s life and yet the fairytale, childish quality of Winman’s writing means there’s a lightness to it all – even the disastrous nativity play that ends with baby Jesus in a coma.
When the family wins the football pools (the pre-Lotto way to be a millionaire in the UK), they move to a big house in Cornwall where they begin to collect oddball hangers-on that help make up for Elly’s loneliness and the untimely death of God the rabbit.
Part Two begins in the mid-90s with Elly grown up and struggling to establish her own life. The story continues through to 9/11 and the way that event touches the lives of those she loves. Here inevitably some of the lightness and whimsy leaves the writing – even Winman can’t be amusing about the fall of the Twin Towers.
There is a lot going on in this book issue-wise – from faith and sexuality, to coming to terms with being an outsider, to loss, abuse and the general unfairness of life. Winman balances these themes with pathos and humour. She has a particular talent for comedy and at times the book is laugh out loud funny particularly in the beginning.
So all in all, this is an immensely readable novel, a little bit bonkers and a lot of fun. Oh yes and quite possibly it wins the contest for strangest title.
Footnote:

Nicky Pellegrino, a succcesful Auckland-based author of popular fiction, The Italian Wedding was published in May 2009, Recipe for Life was published in April, 2010, while her latest The Villa Girls, was published three weeks ago and is riding high on the NZ bestseller list.
She is also the Books Editor of the Herald on Sunday where the above review was first published on 24 April, 2011 as was the Booklover column below.
Booklover

lizabeth Smither is an acclaimed New Plymouth based poet, novelist and short story writer. She has recently released The Commonplace Book (AUP, $34.99) a collection of thoughts about writing and the writer’s life


The book I love most is….... Persuasion by Jane Austen for its highly-strung and matchless ending. Transport may have changed and clothing but all her characters: the incurably vain father, the social climbing sister, the true friend who spills the beans, all exist in the world today. Austen knew we have to work on ourselves if we want to find happiness.
The book I’m reading right now is…..... A Perfect Waiter by Alain Claude Sulzer. Staff and clientele of a glamorous Swiss hotel feel the chill hand of Nazism but the real treachery is personal. Love and betrayal between two waiters: one a model of self-containment, the other a practised seducer.  I love novels set in hotels.

The book I’d like to read next is…....The Sound of a Wild Snail Eating by Elisabeth Tova Bailey. Elizabeth became ill with a mystery virus while travelling in Europe: a friend bought a gift of violets and a snail in a pot.  Confined to bed she could hear the snail eating: “the sound of someone very small munching on celery”. I like writing that resembles slow cooking and what could be slower than a snail?

The book that changed me is....... Death Comes for the Archbishop by Willa Cather. A French Catholic bishop and a priest attempt to establish a diocese in New Mexico among the Hopi and Navajo people.  It has everything: unforgiving landscape, unfathomable cruelty and sacrificing love. Cather puts her characters in extreme situations that test them to the utmost. There is a wonderful scene where a priest and his guide take shelter in an ancient cave during a blizzard and hear, far below the earth, the mysterious movement of an unchartered river. The spare beauty of the prose never fades. 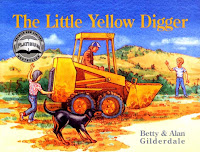 The book I wish I’d never read is…....The Little Yellow Digger by Betty Gilderdale. Nothing wrong with the heroic little machine but after hundreds of readings I failed to find the tone of voice that could lift the flat sentences. Perhaps the little yellow digger was just too helpful for my taste? Didn’t Jane Austen say “Pictures of perfection make me sick and wicked”. Closely followed by The Hobbit. ‘Do we have to go on with this?’ I asked my son and he shook his head. Terrible dialogue and not much better description. Perhaps Peter Jackson can rescue it?
Posted by Beattie's Book Blog at 6:08 am