Digested read: Notes From My Kitchen Table by Gwyneth Paltrow 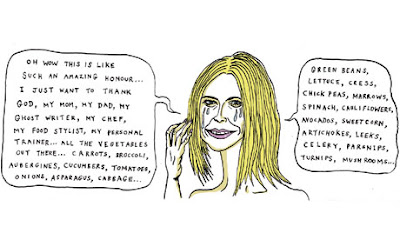 Illustration for the Guardian by Neal Fox
This book is dedicated to the Wigmore-Reynolds, the Van Nices, the Turly-Burnses, the McCartney-Willises, the Nadal-Saxe-Coburgs, the Cameron-Cleggs and all the other little people with whom I have shared so many wonderful meals. But the biggest thank you goes to the trees who gave me their permission to be pulped.

I literally could not have written this book without the literal assistance of Julia Turshen who literally did all the cooking and writing while I literally did yoga classes and literally had my hair done for the photo-shoot.

"Why?" you may ask, would the world's greatest actress wish to share her kitchen secrets.
It is because I have the secret of eternal life. When my beloved father, who taught me so much about cooking, was diagnosed with cancer in 1998, I became convinced I could cure him with a macrobiotic diet. Sadly he died, but only because he had eaten too much steak and chips when he was young. But with these recipes my children and possibly your children, if they have double-barrelled surnames, can live for ever, and if you think I'm going to mention my idiot husband Chris and his rubbish band then you've got another think coming – he's never supported my ambition to be hailed as the new lifestyle goddess of those with too much time on their hands.

How to use this book Get a member of your staff to read it out loud while you are having a pedicure. If a recipe sounds tasty, ask him to cook it. If some ingredients are unavailable, call my favourite gourmet organic deli in Bel Air and have them flown over.

Read the rest of this story at The Guardian, it is a hoot!

Posted by Beattie's Book Blog at 8:31 am

O how I loved this Crace piece! LOL at the "stick insect pancakes"! A truly enjoyable way to start the day-