Are publishers ignoring the goldrush?

Buying back the rights to a debut novel and republishing it yourself as an ebook sounds complicated, but it's not, writes DECLAN BURKE , who is selling his for 99 cent on Kindle.

Story in The Irish Times. 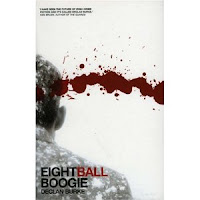 SIX WEEKS ago I bought back the rights to my debut novel, Eightball Boogie , which was published by Lilliput in 2003. Three days later, I republished the book on Kindle, complete with a new cover. To date, the ebook of Eightball Boogie has sold 108 copies.
That may not sound like a lot of books sold, and in truth it’s not. Worse, given that the ebook of Eightball Boogie is retailing for 99 cents and 86p, the royalties aren’t going to buy me a Greek island retreat any time soon.
Here’s the thing, though. It didn’t cost me a red cent to publish my novel to Kindle. Furthermore, I have no overheads and no distribution costs, no returns to worry about. And while sales of 108 copies in six weeks doesn’t sound like a lot, ebooks don’t have the same shelf-life as conventionally published books.

Once an ebook is published, it stays published forever. And the kicker there is that ebook sales are incremental – the more books you sell, the more books you sell. Of my precious 108 copies, two-thirds were sold in the second month, as the five-star readers’ reviews on Amazon started to pile up.
Is my book selling simply because of its bargain-basement price? Victorine Lieske’s experience suggests that it is. You probably won’t have heard of Lieske, who publishes her novels solely in ebook form, but the American indie author has sold over 60,000 ebooks in the last 12 months.
“Certainly low pricing does help some books sell well,” says Lieske. “I know I wasn’t selling many books until I slashed my price. However, if you look at the Top 100 bestsellers on Amazon, there are quite a few books that are priced higher than a paperback book would be.

“If people really want to read a book, they’ll pay a higher price for the convenience to get that book delivered wirelessly in an instant.” When Lieske published the romantic suspense ebook Not What She Seems in April 2010, she sold seven copies in her first month. In February 2011 alone, she sold over 28,000 ebooks. Pricing is a crucial issue for her as she considers a number of offers to have her book published as a paperback.
“If I publish myself,” she says, “I can price at $2.99. If I sign with a publisher, I’m looking at my book possibly being priced at $9.99 or higher, which is not fair to readers and will ultimately mean fewer sales. If a publisher were to put in a contract that they wouldn’t price my book higher than $5, I would be much more likely to sign with them.”
Full story at The Irish Times.
Posted by Beattie's Book Blog at 6:45 am

Interesting that authors think their work is only worth 99 cents.