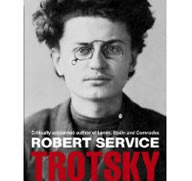 A life of Russian revolutionary Leon Trotsky has won the 2009 Duff Cooper Prize, which was awarded last night (24th February).

The Duff Cooper Prize was set up in 1956 in the name of the diplomat and author to celebrate the best in non-fiction publishing.
Posted by Beattie's Book Blog at 7:55 am