The announcement at midnight last night (see post before this one) of the shortlisted titles for the South East Asia & Pacific Region of the Commonwealth Writers Prize was accompanied by a press release from Random House publicist Jennifer Balle who is never one to take her eye off the ball or miss a chance to promote one of her authors. Balle is the publicist looking after award winning author Charlotte Grimshaw.

Here is the release: 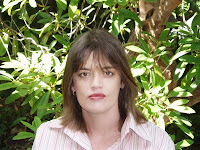 mshaw is in the running to win the influential 2010 Commonwealth Writers’ Prize for Singularity, her second short story collection which was published last year.

Having been short-listed along with five other South East Asia and Pacific writers for Best Book, Singularity will now go through to the next phase of the competition, where the South East Asia and the Pacific regional judging panel will meet to decide the two regional Commonwealth winners for Best Book and Best First Book. The regional winners will be announced in Sydney on 11 March in Sydney and the two overall winners will be announced in India on 12 April.

Both short story collections have been previously shortlisted for Ireland’s prestigious ‘Frank O'Connor Short Story Award.’
Charlotte Grimshaw will be appearing at this year’s ‘New Zealand International Arts Festival, Writers and Readers Week’ in Wellington on Friday, 12 March. She also has a new novel, The Night Book, coming out in May. Her first in five years, The Night Book cleverly further-develops a character who has appeared in the two short story collections.

In this powerful collection of short stories, Charlotte Grimshaw continues to develop the structure she explored in Opportunity, her first collection of short stories. Characters from that book reappear and new characters are added. The stories in Singularity cover a wide range of territory, from childhood innocence to adult desperation, from the depths of poverty to cushioned affluence, from London to Los Angeles, Ayers Rock in Australia to the black sand beaches of New Zealand’s wild west coast. The stories can be read as discrete pieces, yet each contributes to a unifying narrative. Richly detailed, vivid with local colour, each story is an inspection of human motive and of the complex ties that bind five principal characters together.

ABOUT CHARLOTTE GRIMSHAW:
Charlotte Grimshaw is the author of three critically acclaimed novels, Provocation, Guilt and Foreign City, and two short story collections, Opportunity and Singularity. Opportunity won the Montana New Zealand Book Award for Fiction of Poetry. She has been a double finalist and prize winner in the ‘Sunday Star-Times Short Story competition’, and in 2006 she won the BNZ Katherine Mansfield award for short fiction.
Posted by Beattie's Book Blog at 7:48 am

Fantastic for Charlotte, but also for New Zealand writers, because surely per head of population we must lead the world in talent for the short story... Owen Marshall, Alice Tawhai, Witi, Patricia Grace, to name a few. Fingers crossed for Charlotte and for Albert Wendt.