Martin Amis responds: A poor godparent, yes, but I did not 'fill in time' at friend's deathbed
• Novelist responds to Anna Ford's 'ungenerous' attack
• Letter suggests 'personal troubles' behind criticisms 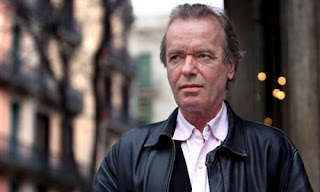 is says Anna Ford was 'misremembering' in letter to the Guardian. Photograph: Xavier Bertral/EPA

Rarely one to turn the other cheek, the novelist Martin Amis – who was the subject of an open letter from Anna Ford in ­Saturday's Guardian accusing him of narcissism, neglect of his godfatherly duties and smoking over her late husband's deathbed – has counter attacked, calling the former newsreader's outburst "ungenerous and self-defeating".

Amis retaliates against Ford, who is the widow of Mark Boxer, a close friend of Amis until his death in 1988. "I was astonished. I was best man at her wedding. [The attack] makes me wonder how long all this has been brewing," he told the Guardian today.
Calling Ford's letter "eagerly ungenerous and self-defeating", he said: "She'll regret all this. She is undermining the memory of Mark, whose friends really did adore him." He added, addressing Ford: "You only have to ask yourself two questions: if Mark were alive, what would he think and how would he feel?"

Amis rejects Ford's account of his visit to Boxer's sickbed, in which, she wrote: "You stayed far too long. You smoked over his bed." According to Amis: "I never smoked a cigarette in Mark's bedroom." And to Ford's claim that "you wrote a piece about your feelings and tears as you left. I saw no evidence of these," he responds: "I said my last words to him and he said his last words to me, and I remember very clearly what they were. Then I left, and managed to reach my car before I was overwhelmed."

He rejects Ford's charge he was "filling in time before you caught a plane at Heathrow" (the Ford-Boxer family home was in Brentford, near the London airport). That is misremembering, claims Amis; the flight in question was the next morning. He writes: "You are conflating two separate visits (and I made several such, not only to your house, but also to that Tudorbethan hospital in Maida Vale)."
However, to one part of Ford's indictment Amis pleads guilty. "It is true that I am a useless godfather," he writes.
The full pice at The Guardian.
Posted by Beattie's Book Blog at 6:58 am

i am now reflecting morosely on my own abilities as godfather, expecting to be raked through the tabloids shortly

I must say that I haven't been any great shakes as a godfather either!