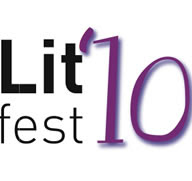 Lee Child and Joanne Harris are among the authors appearing at a Random House Transworld book festival, in what is believed to be the first such event run by a publisher.

LitFest 10 will be held in libraries across Hertfordshire from 25th March to 27th April. The event is being run by Transworld and Random House Children's Books and will be promoted in independents such as Maher Books and Books@Hoddesdon, as well as local Waterstone's branches.

Alison Barrow, director of media relations at Transworld, said the festival was in response to the increasing popularity of literary festivals during the past decade. She said: "So many of our authors at Transworld have enjoyed good audiences and solid sales at the numerous and varied literary festivals throughout the year in the UK, but it's not always possible to schedule events for everyone and programmes get filled very rapidly, so we thought, why not set one up ourselves?"

Barrow said she had worked with Shirley Everall, a legacy officer for the National Year of Reading at Hertfordshire Libraries, last year for several events. It was conversations with her last month that led to the festival being set up.

She added that the festival will be promoted online, through author websites, Facebook and Twitter, as well as the local media. She said: "If it proves successful, there's every reason to think we might stage an annual event."
Posted by Beattie's Book Blog at 8:33 am