HarperCollins has bought a book about the true events that inspired Agatha Christie's play The Mousetrap through authonomy, its website for writers.

Someone to Love Us by Terence O'Neill will be published on 4th March. World rights were bought in an unagented deal by Carole Tonkinson, and Kate Latham, editorial director for Harper Non-Fiction for an undisclosed sum.

In the book, O'Neill tells of the events of 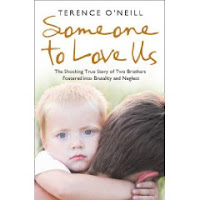 1945 when he testified against his brutal foster parents as a 10-year-old in a case where they were accused of the manslaughter of his 12-year-old brother Dennis.

Both Dennis and Terrence suffered beatings at the hands of Reginald and Esther Gough at their Shropshire farm. Then one morning he could not wake his brother. The case led to the instigation of the first provisions to protect children from neglect and cruelty. It also was the original inspiration for Agatha Christie's play, The Mousetrap.
Posted by Beattie's Book Blog at 6:02 am