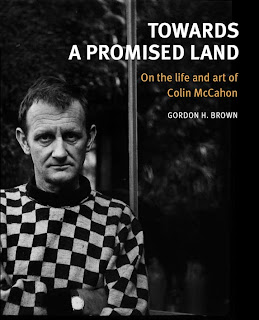 Included are notes (these are fascinating); acknowledgements; photographic credits; a list of the 75 illustrations; index.

The 16 essays in this book draw on Gordon Brown’s many years of writing, thinking and talking about McCahon’s paintings.
Brown was a trusted friend of McCahon’s for more than 30 years.
He wrote the classic and now long out of print Colin McCahon: Artist
Since 1977 he has continued to write on the visual arts, as well as contributing to journals and gallery publications on New Zealand art.

Parsons Bookshop Auckland is the bookseller at the launch of this book at Gus Fisher Gallery, Shortland Street on Thursday 4th March at 5.30pm.

Only a small print run is available; we are taking orders.
It’s a book we really want to sell well for the author and for the publisher, Auckland University Press.
Brown’s position is unique because of his being such a long term and intimate family friend.

Footnote:
The Bookman has an advance review copy of Towards a Promised Land and agrees absolutely with the enthusiastic comments above from Helen Parsons. This is a very special book, a fine piece of publishing, (I always greatly appreciate French folds being used on covers of special titles like this one), an important work of scholarship by our leading McCahon scholar. My congratulations to both author and publisher, you should feel very proud indeed.

Publication date 10 March 2010. I urge you to order your copy now . The McCahon colour images are worth the cost of the book on their own. Then you still have Brown's marvellous text. 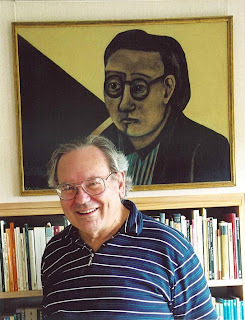 in 1931, and now lives in Auckland. He graduated with a Diploma in Fine Art from Canterbury College School of Fine Art in 1956 and exhibited with several dealer galleries in the 1960s. His paintings have appeared in major surveys of contemporary New Zealand painting at the Auckland City Art Gallery and in recent years his photography has been exhibited.

During 1960 Brown trained at the National Library School. Between 1960 and 1977 he worked in libraries and art galleries throughout New Zealand, including the Alexander Turnbull and Hocken Libraries, Elam School of Fine Art, Auckland City Art Gallery, Waikato Art Gallery and the Sarjeant Gallery. In 1977 he returned to Auckland and has worked since then as a freelance writer on the visual arts, and has contributed to journals and gallery publications on a range of contemporary New Zealand art.

He was awarded the OBE for his services to Art History in 1989. In 2002, he was awarded an honorary DLitt by Victoria University of Wellington, which also established the Gordon H Brown Lecture Series, named ‘in honour of the achievements of the distinguished New Zealand art historian’ to further art historical scholarship in New Zealand.

The Bookman salutes you Gordon.
Posted by Beattie's Book Blog at 2:38 pm