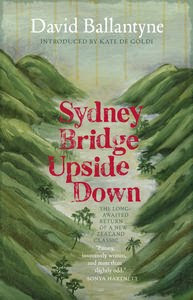 How did we fail to give this gripping, funny, desperately sad, great New Zealand novel, set "on the edge of the world", its due when it was first published in 1968? (The critical response can't have been encouraging. It was 10 years before David Ballantyne published another novel.)
Was it because we were embarrassed that Janet Frame's Owls Do Cry and Ian Cross' The God Boy, both a decade earlier, and Ronald Hugh Morrieson's The Scarecrow, published in 1963, had demonstrated painfully that not only was New Zealand not a good place to bring up children but that small towns were full of imploding, destructive families? [Something I knew, by the way, from having lived in one in the 1940s.]

Sydney Bridge Upside Down was reissued by Longman Paul in 1981, to a reaction I can't recall but it remains New Zealand's greatest unread book. I know that when I did read it - either at the end of the 1960s or in 1981 - I thought it so agonisingly in tune with my experience I could hardly regard it as fiction.

But it was not until last year, when I was urged to read it again, that I understood fully what a masterpiece Ballantyne had pulled off, what an amazing close-up of the condition of childhood - particularly New Zealand childhood - he had created; and, more importantly, what a great novel it is.
What I didn't know until recently was that Wellington writer and critic Kate De Goldi and a group of writers and friends had been championing the book for years and helped persuade an Australian publishing house to bring out this edition (with an introduction by De Goldi).

Harry Baird - immediately post-pubescent - tells the story of his life over one summer in a small, remote North Island east coast town, Calliope Bay, with his one-legged father and younger brother, Cal. They have been abandoned by their mother. They are all desolate at their loss but in the manner of the time try to pretend it didn't matter much. They are joined by the boys' beautiful teenage cousin from the city, a flirt and sexual tease who introduces a fine strain of eroticism into the story. Harry comes under her spell.

The town has shrunk from what it had once been by the closing of the freezing works and few families remain. Among the local characters, always in the background, is enigmatic, laconic loner Sam Phelps and his horse, Sydney Bridge Upside Down.

The Baird boys live an adventurous life of freedom to do pretty well what they like while their father is at work. Like all kids, they relish most what they are not supposed to do, like haunting the crumbling old freezing works building. Even the kids with mothers are left mostly to their own devices in their free time, in a way I remember but which today would see parents before the courts or dispossessed of their children by social welfare authorities. They learnt how to look after themselves in what are now extraordinary ways, but all the children, especially the Bairds, bear family burdens of some sort in this introverted, deeply repressed community.
Harry's sense of self is seriously at risk. It conditions his sometimes bizarre behaviour and leads to catastrophes that make it impossible for him to continue to live in the settlement. The climax will break your heart.

The plot is intricate but the story seamlessly told and the language, especially the dialogue, is unerringly authentic. Readers may sense from this language that Ballantyne was profoundly influenced by writer and mentor Frank Sargeson, who described him, at 19, as "dangerously fluent" but "one of our great hopes and God bless him and save him - particularly from journalists and journalism".

In the barren literary landscape of his time, nothing could save Ballantyne from the daily grind of journalism. He was a top-flight practitioner who worked for newspapers and magazines in both New Zealand and Britain and ended his career as a leader-writer on the now-defunct Auckland Star. Throughout his working life, without any kind of the generous financial support available to writers nowadays, he was forced to write his fiction in his non-working hours.
Yet his lifetime achievement was considerable. In 1948, when he was in his early 20s, his first novel The Cunninghams was published in the United States to some acclaim. When he was working in Britain he had television drama produced by the BBC. He wrote a number of other novels and short stories.

Ballantyne died in 1986 and, despite an excellent biography by former journalistic colleague Bryan Reid, After the Fireworks, published by Auckland University Press in 2004, his reputation has, if anything, dimmed. We can hope this resurrection of his finest novel will gain him the readers he deserves - at last.

Footnote:
After the Fireworks by Bryan Reaid is still in print.
Posted by Beattie's Book Blog at 10:25 am

An excellent review of a great book.

Unfortunately something is not working when I try to print the review. Page 1 is fine but page 2 will not print ???????? (not a major problem - but a pity> Any possibility of fixing?

Not sure what is happening there Keri. When I am home again next week and reunited with my printer I'll check to see if I have the same problem.
Ciao

Many thanks for your note. I hope you find the same & can fix it.