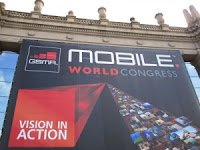 BARCELONA: On February 15, the first day of the Mobile World Congress in Barcelona, Sony Ericsson CEO Hans Vestberg predicted that in five years, there will be three billion new mobile broadband users, and by 2020, there will be 50 billion connected devices. According to the Congress Show Daily, smartphones represented 15.4% of the mobile market in 2009, up from 2.4% in 2008. Needless to say, the growth in mobile media consumption has been explosive and there are no signs of a slowdown.

If book publishers add one thing to their to-do lists this year, it should be to develop and execute a mobile content strategy to take advantage of this growth.

Are Phones More Important than E-Readers to the Future of Publishing?
By Edward Nawotka

oday's headline story Hannah Johnson reports back from this year's Mobile World Congress in Barcelona, Spain where a variety of new devices and display technologies were introduced. For publishers in the United States, the focus for the future of e-reading has been primarily on the larger format, dedicated e-readers such as the Amazon Kindle and Apple iPad. In much of the rest of the world, where dedicated devices have been slow to come to market, the focus is on the mobile phone.