If winning first prize in a Carnaby Street nightclub for the best legs in London under a mini-skirt qualifies me for the part of leggy temptress Scheherazade in Martin Amis's new novel, she's all mine.

The year was 1970. I was 17, the prize was £100 to spend in the Pussy Galore boutique, and a school friend and I pitched up in skirts whose waistbands had been rolled over and safety-pinned so many times they hid nothing but the barest of bare minimums from view. I had already known Mart for years - he was the stepson of my godmother Jane [novelist Elizabeth Jane Howard] and I was as in awe of him as my youngest daughter is now of her older brother's friends.

You don't imagine that older boys could ever fancy you, and when Mart went off to Exeter College, Oxford, he entered another world; I was still at school. I was at co-educational Bedales, and we girls had crushes on our "heroes", boys four or five years older, though the greater part of these was yearning for what we knew, and in some ways hoped, was the unattainable. We weren't ready for anything more.

When Jane and her husband, the novelist Kingsley Amis, Mart's father, moved to their house, Lemmons, in Hertfordshire, I used to go for weekends. I was, like most teenagers, desperate to escape the confines of home, the perceived illiberality of my own parents [Poet Laureate Cecil Day-Lewis and actress Jill Balcon] and the stultifying tedium of being a teenager. Lemmons was full of impossibly glamorous older people and a core commune of writers, painters and inventors; even the dogs and cats shared a communal basket, and there were always stray writers and publishers whose marriages were unravelling. The drink flowed as freely as an open artery at family dinners. After all, "Kingers", as we knew Kingsley, wrote about drink for Playboy, which sent him crates of assorted liquor every week.

When Mart came back from Oxford at weekends with Gully W 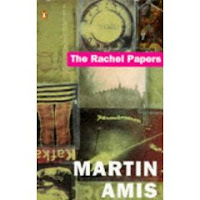 ells, to whom he dedicated his first novel, The Rachel Papers, I was very much the skinny, gawky, teenager, as shy of opening my mouth as of attempting to join in. Mart was decked out in skin-tight velvet trousers, floral shirts from Deborah and Clare in Beauchamp Place, velvet jackets and Chelsea boots with Cuban heels. Gully was tiny, pretty, blonde and dressed almost identically.
Read the full fascinating piece at The Evening Standard.
Posted by Beattie's Book Blog at 5:56 am