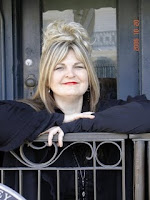 JEFFERSON, TEXAS: They say everything is bigger in Texas...and it's true. When I opened Beauty and the Book in January 2000 -- the ONLY hair salon/book store in the world -- in January 2000, one of the first things I did was start my book club, The Pulpwood Queens of East Texas. We started with six complete strangers -- and became in ten years, what is now the single largest "meeting and discussing" book club in the world!

As of this writing I have 266 chapters running nationwide here in the United States -- with a total of some 3,000 members -- and additional chapters in Mexico, France, Italy, Japan, Taiwan, Germany, Scotland, England, Canada and New Zealand.

In today's lead story Kathy L. Patrick, founder of the Pulpwood Queens Book Club, discusses how she expanded her small town book club into an international juggernaut. It is likely the single biggest "meet and discuss" book club in the world. Of course, there are online book sites, such as GoodReads.com, LibraryThing, and others that foster discussion about books - and are certainly bigger. But can an online book club replace a real life discussion? Are they as satisfying or enriching?