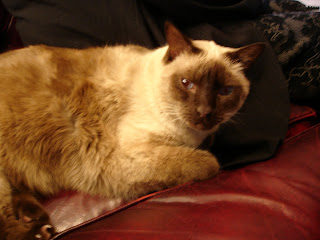 very sad to announce that Oscar, the beloved resident Tonkinese cat, has been laid to rest this afternoon after an 18 month battle with severe diabetes and pancreatitis.

Oscar lived all his 12 years at Time Out, becoming a fixture of the Mt Eden Village community and a frequent part of the shop’s window displays. A slimmer rendering of his form is seen in the shop’s logo.

He was a special guest star on the first season of TVNZ’s ‘The Book Show’, hosted by Emily Perkins. He will be featured in an upcoming book about international ‘cats at the office’.

Oscar received many letters from friends and fans all over the world, including The Lovely Bones author Alice Sebold.

A memorial will be held in Oscar’s honour at Time Out Bookstore, 432 Mt Eden Road on Thursday 25 February at 5.30pm.

Footnote:
Oscar was loved by staff and customers alike but another group that were especially fond of him were the publishers reps who called monthly to sell books and to stroke and cuddle Oscar.
The Bookman is sure that messages of sadness will be pouring in from all over NZ..
Posted by Beattie's Book Blog at 1:42 pm