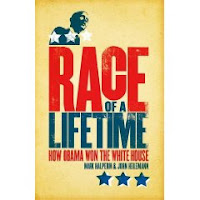 American politics is far more fascinating than our own, largely because of its sheer size, complexity and global importance. Hundreds of policy and communication wonks parse every gesture of their candidate, every misstep of their opponent.
Thus the chief pleasure of Race of a Lifetime, the non-US title (there: Game Change) surely also some sort of play on Barack Obama being the first non-white president, is to wallow in the good oil extracted by way of hundreds of interviews by the authors of the main participants and army of advisers in the latest run for the White House. It's West Wing as documentary.
Long story short: Obama comes across as preternaturally calm, shrewd and calculating yet always decent; Hillary Clinton as brainy, dogged, and a policy savant; John McCain as smart and principled but irascible and relying too much on instinct; Sarah Palin as brilliant on the stump but an intellectual embarrassment.
It's sharply written and engaging but opts for revelations of fact and character over overt analysis. The relentless madness of the campaign trail is revealed; what is not is the ongoing desiccation and decay of the American political system: the presidential nomination system, Senate disproportionality, pork-barrel and earmarks, redistricting, the filibuster, to barely mention the sometimes self-destructive nature of the country's aspirational classes and conservative Christianity in politics. Still, excellent stuff for casual wonks.

If you've ever wanted a concise explanation of the legal status of commercial sex in Japan, Tokyo Vice provides one. Any sexual service is legal as long as it's not intercourse. Explicit manga comics are everywhere, yet hard-core porn is illegal.
It's one of the many oddities Westerners find fascinating about Japan. But Adelstein has much more than just titillation to offer his readers. Unlike the authors of many other books on Japan, he is no ordinary fly-by-night gaijin. As a crime reporter on the top-flight Yomiuri Shimbun, Adelstein was the only American journalist admitted to the Tokyo's police's press club - membership of which provides access to otherwise unavailable information and friendships with officers. Sure, he paints himself in the book's thriller-like prose as something of the fearless, relentless go-getter (if a little goofy at times), but by the end of the book - having waded with much black humour through lakes of sleaze and confronted murderous yazuka, bagging terrific scoops, you will probably agree he's worthy of respect.
Along the way, he relates much more about a culture he has clearly grown to love. The odd relationship between yakuza and police, the obsession with behaviour manuals, his palpable regrets. Setsunai is "a feeling of sadness so powerful that it feels as if your chest is constricted". Yarusenai is grief or loneliness so strong you can't get rid of it. A colleague is forced out of the paper kills herself, and two days before she emailed him. For Adelstein, yarusenai is the one email "you never replied to and will never open. It's the bad advice you gave and the phone call you should have made … it's thinking about the friends that you suspect you might have been able to save." 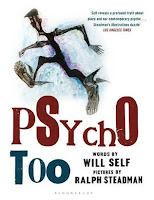 cho Too
Will Self, Ralph Steadman
Bloomsbury/Allen & Unwin, $59.99

Will Self is the author of several works of fiction, including The Book of Dave, The Quantity Theory of Insanity and Great Apes, though I prefer his journalism.
His prose his clear and vibrant, fizzing with ideas and insights and occasional poetry, never a word is wasted. His recall, even presuming copious note taking, is amazing, and it's tempting to believe his immense imagination fills in the details like the zoom on a digital camera. Junk Mail was particularly enjoyable.
Psycho Too, a collection of his "Psychogeography" UK newspaper columns, illustrated by cartoons from the delightfully mad Ralph Steadman, is less compelling. For one, it feels like well, a series of columns, despite a stated theme. For reasons that were not entirely clear to me, he decided to "walk" from the house of JG Ballard, the dying author and Self's friend and hero, near London to The World, the artificial islands off Dubai. The scenes in which he attempts to get from Dubai airport to his hotel are worthy of monograph. He journeys to Rio, Santiago, Paris, Toulouse, Ibiza, Scotland's Glen Coe and Easter Island, wearing out his shoe leather as much as he can. It's the kind of writing that makes newspaper readers jealous of journalists, particularly celebrity ones like Self. It's always engaging, but it also feels too much of an exercise (pun acknowledged) for its own sake. Steadman's vivid, scratchy, often scatological artworks are always pointedly brilliant, though I could have done with slightly fewer.

Self seems to know the name for everything, the brand or make of every product, the precise word for every eventuality. Hence his preference for sprinkling long and unusual words into his sentences: lubricious, minatory, Brobdingnagian, peregrination. Usually he reaches into his cranial thesaurus with perfect accuracy. But he's also a writer who will opt for "modalities" when "places" might have been less precise but also less distracting.
Perhaps one best for completist fans.

Footnote:
Author/journalist Mark Broatch wrote the above reviews.
The Bookman warmly recommends Mark's book, In a Word.
My copy is right here on my desk and is frequently consulted.
Posted by Beattie's Book Blog at 3:17 pm