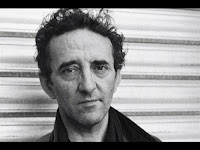 Almost 10 years after his death the English translations of this Chilean author seem to be everywhere. The man has become something of an international sensation.

Here is what Wikipedia has to say about him:

Roberto Bolaño Ávalos (Spanish pronunciation: [roˈβerto βoˈlaɲo ˈaβalos]) (April 28, 1953 – July 15, 2003) was a Chilean novelist and poet. In 1999 he won the Rómulo Gallegos Prize for his novel Los detectives salvajes (The Savage Detectives), [1] and in 2008 he was posthumously awarded the National Book Critics Circle Award for Fiction for his novel 2666.[2]

pile, (mountain might be more accurate than pile!), one is 600 pages long and the other 900 pages, so they are likely to remain there until a holiday beckons.
They are both Macmillan paperbacks and at $29.99 represent great reading value.

The Triumph of Roberto Bolaño - New York Review of Books, Dec, 2008
Latin America's literary outlaw - The Observer, January 2009
The many deaths of Roberto Bolaño -How a brave Chilean poet became a cult novelist and chronicler of the apocalypse - The Times, January, 2009
Posted by Beattie's Book Blog at 2:17 pm