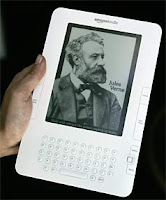 E-book sales from the 13 publishers that report figures to the Association of American Publishers soared 176.6% in 2009, to $169.5 million, the AAP reported Friday. The jump in e-book sales coupled with a slight decline in sales of print trade books increased e-book's share of trade sales from 1.2% in 2008 to 3.3% in 2009. Among the print trade segments, sales were down in the trade paperback, mass market paperback and children's hardcover segments, but up in adult hardcover and children's paperback.

The elhi segment had the weakest performance in the year with sales from the nine reporting companies down almost 14%. The biggest gain in the year, excluding e-books, was in the higher education category where sales rose nearly 13% at the 10 publishers who reported sales.
Posted by Beattie's Book Blog at 6:44 am