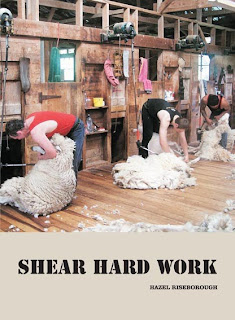 Shear Hard Work brings to life the noise and bustle, the long days and hard work, and the extraordinary men and women of the New Zealand shearing industry.

From the 1850s, when shearers were disparaged as the ‘very dregs of the colonial democracy’, to the present day when New Zealand shearers set world records and shear sheep around the globe, shearers have played a defining role in New Zealand life. Historian and former wool classer Hazel Riseborough has travelled from Merino stations in Central Otago and high-country blade sheds in Canterbury, to competitions and to the women’s world record attempts at Waikaretu and Mangapehi, to tell this great New Zealand story for the first time.

Dr Riseborough brings us the history of shearing in the words of the shearers and shedhands, wool handlers and classers, cooks and contractors who work in the sheds, compete at the shows and set the records. She chronicles key changes in the industry – from the mechanisation of shearing to the expansion of the shearing season and the shrinking of the New Zealand flock. She explores the changing culture of shearing, the role of Maori and women, and how the efforts of Ivan and Godfrey Bowen helped professionalise the industry. And she looks at those things that persisted – the challenge and competition of life in the shearing shed and the glory of being the ‘ringer’, the fastest shearer on the board.

Shear Hard Work takes us into the country’s rural heart and introduces us to some extraordinary New Zealanders who are on the job at 5 a.m. and who sweat their way to shear brilliance.

Pic left shows New Zealand Championships Open heats at Te Kuiti, 2009. Shearers, wool handlers, judges, pen seconds; Kirkpatrick about to go in for his fifth sheep.
From the author's collection. About the Author
Historian, agriculturalist and Maori issues researcher Dr Hazel Riseborough was born in Wellington, New Zealand, in 1930. She was the first woman in New Zealand to gain a ‘Wool Diploma’: after finishing secondary school she spent a year in practical farming before going to Massey Agricultural College to take a Diploma in Agriculture (Sheep Farming) (1949–50), followed by her Diploma in Wool and Wool Classing (1951–52).

Dr Riseborough moved to Italy in 1960 where, after Italian language courses at l’Universita Italiana per Stranieri in Perugia, she worked as an interpreter and translator in the Department of Cancer Research at the University of Perugia Medical School and La Sanita in Rome.
Back in New Zealand in 1967, she continued as an Italian translator at Codelfa-Cogefar in Turangi, New Zealand. In 1974 she returned to University part-time and completed a BA in Maori Studies in 1981, a BA (Hons) (1st Class) in Maori and History in 1983 and her PhD in History in 1987.
In 1988 she became a lecturer and administrator in the Maori Studies Department of Massey University and in 1989 was seconded to the Waitangi Tribunal. Dr Riseborough lectured in the History Department at Massey from 1991 to 1995. From 1996 to 2002 she undertook historical research and writing on Treaty claims for the Waitangi Tribunal and the Crown Forestry Rental Trust, bringing together her four major interests, agriculture, Maori Studies, New Zealand history and the great outdoors.

She currently lives in Turangi, not far from the magnificent, historic sheep station that is the subject of her book Ngamatea: the People and the Land (Auckland University Press, 2006), which was warmly received and has been reprinted several times.

Dr Riseborough received a CLL Writer’s Award in 2008 to write her latest book Shear Hard Work: A History of New Zealand Shearing (Auckland University Press), which will be launched during the 50th Golden Shears championships in Masterton in March 2010.

This book is an impressive piece of scholarship and an important addition to the nation's social history library. Note publication is 10 March.