Each week, The Daily Beast scours the cultural landscape to choos 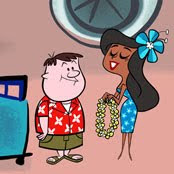 Anyone who saw Ricky Gervais host the Golden Globes knows that the British comedian takes pleasure in the humor of excruciating awkwardness. On February 19, the creator of The Office and Extras unveils his new HBO series, aptly titled The Ricky Gervais Show, which is essentially Gervais chatting with his longtime collaborator Stephen Merchant and friend/punching bag Karl Pilkington. But there's a twist. The conversations have been animated. The talks first began as an addictive podcast series (Gervais and Merchant would make fun of Pilkington for an hour, to hilarious effect), but with the animation, the whole concept is elevated to theater of the absurd.
Find out for yourself why Gervais is still at the top of his game by watching the first episode, now available for free on iTunes.
Check out the whole story at The Daily Beast, great fun.
Posted by Beattie's Book Blog at 10:48 am