A new book about the atomic destruction of Hiroshima has won critical acclaim with its heartbreaking portrayals of the bomb’s survivors and is set to be made into a movie by James Cameron. 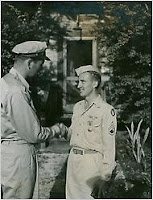 Left - James R. Corliss receiving a medal for his role in the Hiroshima bombing.

Charles Pellegrino (right - Sarah Shatz) says he will correct a story in his book contested by Mr. Corliss’s family.

“The Last Train from Hiroshima,” published in January by Henry Holt, also claims to reveal a secret accident with the atom bomb that killed one American and irradiated others and greatly reduced the weapon’s destructive power.

There is just one problem. That section of the book and other technical details of the mission are based on the recollections of Joseph Fuoco, who is described as a last-minute substitute on one of the two observation planes that escorted the Enola Gay.

But Mr. Fuoco, who died in 2008 at age 84 and lived in Westbury, N.Y., never flew on the bombing run, and he never substituted for James R. Corliss, the plane’s regular flight engineer, Mr. Corliss’s family says. They, along with angry ranks of scientists, historians and veterans, are denouncing the book and calling Mr. Fuoco an impostor.

Facing a national outcry and the Corliss family’s evidence, the author, Charles Pellegrino, now concedes that he was probably duped. In an interview on Friday, he said he would rewrite sections of the book for paperback and foreign editions.

“I’m stunned,” Mr. Pellegrino said. “I liked and admired the guy. He had loads and loads of papers, and photographs of everything.”

The public record has to be repaired, he added. “You can’t have wrong history going out,” he said. “It’s got to be corrected.”

Mr. Corliss died in 1999, but his family preserved the documentary evidence of his participation in the historic flight, including an air medal from President Harry S. Truman. “We’re so distraught,” Ethel D. Corliss, Mr. Corliss’s widow, said in an interview. “Thank God he’s not alive. He was so proud.”

The unnamed B-29 bomber at the center of the uproar flew escort on the bombing run on Aug. 6, 1945, and photographed the mushroom cloud. According to the book, Mr. Fuoco became the bomber’s flight engineer at the last minute when Mr. Corliss fell ill, and he made detailed observations of Hiroshima’s destruction from his seat as the plane’s flight engineer.
Not so, say the two surviving members of the flight crew.

Fascinating story - read the rest at NYT.
Posted by Beattie's Book Blog at 6:13 am