Henry Sutton was born in Norfolk in 1963. After training as a journalist he worked for a number of national newspapers and magazines. He is the author of five previous novels, including Gorleston, Flying and Kids' Stuff, and a collection 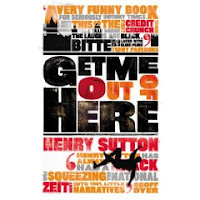 of short stories, Thong Nation. He also teaches creative writing at UEA and lives in Norwich with his family. His new novel, Get Me Out of Here, is published by Harvill Secker.

"Something strange happened to unreliable narrators in the mid-20th century: they became a little more reliably unreliable, and a lot nastier. In the late-19th century they tended to be untrustworthy either because they were hiding something about themselves or had failed to recognise the truth, generally because of some kind of psychological weakness. However, as modernism shifted into post-modernism and we all became that much more cynical, most narrators were expected to be complicated. Unreliability became inextricably linked with malevolence – not to mention duplicity, delusion, even derangement. Of course, as the parameters stretched, unreliable narrators also became a lot more fun, with humour often countering the blackness. The challenge was to make tricksy first-person characters both intriguing and entertaining."

Never straight with himself, let alone the ladies and gentlemen of the jury to whom he is ultimately addressing his words, Humbert Humbert arrived halfway through the 20th century, intent on justifying his appalling crime. Nabokov's syntactical genius is the one true triumph.

Is it a ghost story, or the tragic tale of a young woman undergoing a breakdown? Believing her two young charges are communing with the spirits of her two dead predecessors, the prim governess of Bly House becomes increasingly panic-stricken and erratic, until she's left with a dead boy in her arms.

Right at the start we're told that Marlow likes to spin yarns. However, his tale of journeying up the Congo, in search first of ivory, and then the infamous Kurtz, is one of the most powerful stories in literature. Whether his story is strictly faithful becomes irrelevant, as Marlow ends up highlighting the moral corruption at the heart of all humans.

John Self is one of literature's most repulsively addictive narrators. The book might be subtitled "A Suicide Note", but it is in fact a love story, with Self dreaming up ever more extravagant ways to shed his wedge while pursuing entirely corruptible Selina Street, among others. The fact that Self might never have actually existed, revealed towards the end, is Amis's sly take on the death of the self.

Patrick Bateman makes John Self look even more out of shape, when it comes to commenting on the big brands and applying his murderous hands to the unsuspecting and the vulnerable. Yet Ellis's great comment on consumerism and the death of high culture could just be a mirror to our own deluded thoughts, and Bateman nothing more than a sickly funny fantasist.