Descartes Letter Found, Therefore It Is
By Patricia Cohen
Published in The New York Times: February 24, 2010

It was the Great Train Robbery of French intellectual life: thousands of treasured documents that vanished from the Institut de France in the mid-1800s, stolen by an Italian mathematician. Among them were 72 letters by René Descartes, the founding genius of modern philosophy and analytic geometry. 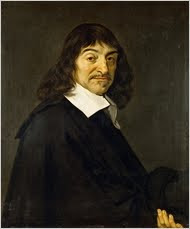 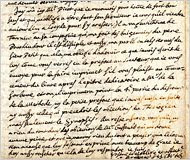 Now one of those purloined letters has turned up at a small private college in eastern Pennsylvania, providing scholars with another keyhole into one of the Western world’s greatest minds.

The letter, dated May 27, 1641, concerns the publication of “Meditations on First Philosophy,” a celebrated work whose use of reason and scientific methods helped to ignite a revolution in thought.

The document, experts say, reveals just how much Descartes tailored his writings to answer his contemporary critics. Frequently suspected of heresy, Descartes sent copies of his arguments to well-known theologians to gauge their opinions and answer their objections within his text.

If old-fashioned larceny was responsible for the document’s loss, advanced digital technology can be credited for its rediscovery. Erik-Jan Bos, a philosophy scholar at Utrecht University in the Netherlands who is helping to edit a new edition of Descartes’s correspondence, said that during a late-night session browsing the Internet he noticed a reference to Descartes in a description of the manuscript collection at Haverford College in Pennsylvania. He contacted John Anderies, the head of special collections at Haverford, who sent him a scan of the letter.

“This was exhilarating,” Mr. Bos wrote in an e-mail message. “Seeing Descartes’ handwriting appear on my screen took my breath away.”

Descartes, the author of “Cogito, ergo sum” — “I think, therefore I am” — spent two decades living in Holland. Mr. Bos’s research is part of a large project sponsored by the Netherlands Organization for Scientific Research.

It turns out the letter had been donated in 1902 to Haverford’s library by Lucy Branson Roberts, whose husband, Charles Roberts, was an avid autograph collector. He had bought the letter without knowing that it was stolen.
More at NYT.
Posted by Beattie's Book Blog at 8:02 am