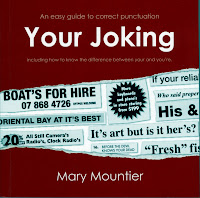 YOUR JOKING
Mary Mountier - Grantham House Publishing - $19.99
If you don’t realise the title “Your Joking” is a deliberate mistake........
then you’d better read this book.
If you do get the point, but have ever slipped up on when to use an apostrophe in other similar words (like it’s and its, or who’s and whose), then this is a must have reference book for you to place alongside your Oxford Concise Dictionary.
Better known for her horse racing books – she has published seven - Mary Mountier has produced a handy little guide for everyone who still bothers about punctuation and correct English.
It’s no coincidence that the title is the registered name of a New Zealand racehorse.
All the most common mistakes are covered, illustrated by clippings she’s been collecting for nearly 20 years, and her own drawings. It’s written in non-academic language, with easily understood rules for avoiding mistakes. It includes sections on “Confusing words”, which explains when to use “complementary” rather than “complimentary”, or “imply” instead of “infer”, and “Words to avoid”, such as the non-word “agreeance” – heard in the media, if not yet seen written.
The book is far from pedantic. Recognising that language standards are always changing, and in some situations (like texting) don’t matter much, Mountier simply makes the point that anyone who wants their writing to be taken seriously needs to follow the rules of English as they are commonly accepted today. The real estate industry and sports writers appear to be the most frequent offenders, but examples from weightier
publications (unnamed) also feature.

We head up to our cottage near Matakana most weekends and I am always offended/annoyed by the sign up there that reads Your Entering Matakana Country so last weekend while in the small but perfectly formed Village Bookshop at Matakana Village I saw this book and I just had to buy it. The best $20’s worth of fun you could wish for.
Great stuff Mary.

And this is what longtime broadcaster and author on language Max Cryer said to the author:

I was relishing 'Your Joking' and thinking at the back of my mind - "I hope she gets round to alot..' and behold, p.88 there it was. Thank goodness - and thank you for that and all the rest of the painlessly explained necessities. Would that it were a compulsory memorising exercise for every schoolchild in New Zealand, but alas little hope. We even have a Leader Of The Nation who thinks the plural of 'woman' is 'woman' ( I've been answering listeners' language questions on radio for 13 years and that is the problem which has cropped up more than any other). If ever we meet I'll bore you with an analysis of the phenomenon of 'Metathesis' ( which is the background to pages 89 and 91) and might even get as far as discussing the NZ characteristic of 'Hypocorism' ( baby-talk by adults ...vegies and sickies and cardies) !
http://www.granthamhouse.co.nz/
Posted by Beattie's Book Blog at 6:27 am

Nice book and so needed!Trouble is it won't rescue punctuation from oblivion but will appeal to those amongst us who still remember how to do it!