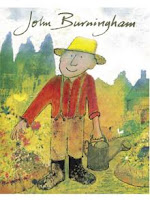 Declaration of interest.
Bookman Beattie has been a devoted admirer of this author/ illustrator since 1964 when he first came across Borka, the Adventures of a Goose with no Feathers. That title, his first, won him the Kate Greenaway Medal and was followed in short order by Trubloff the Mouse who wanted to play the Balalaika, Humber, Mr.Firkin, and the Lord Mayor of London, and Canonball Simp. In 1970 Mr.Gumpy’s Outing arrived, another kate Greenaway Medal winner and in 1973 Mr.Gumpy’s Motorcar. There have been many more since but these were the titles I read to my young children and they loved them too.

Somewhere around this time in the early-mid-70’s Burningham and his children’s book illustrator wife, the also highly talented Helen Oxenbury made a visit to New Zealand.
I was a bookseller in Napier in those days, specializing to a large degree in children’s books, and reviewing them on TVNZ’s Today at One, and the local representative for Jonathan Cape in NZ, John Hall, invited me to spend a couple of days with the pair in Wellington. It was one of the highlights of my time as a bookseller. They were great company and as an aside I recall John Burningham being passionately opposed to Muzak in hotel lifts and lobby areas. But that is another story for another day.

All these years, and many more books later, he is still published by Jonathan Cape, now part of the Random House Group, and they have done him proud with this stunning new, highly illustrated celebration.
Told in his own words, and featuring a delightful foreword by another great talent, Maurice Sendak, and with a terrific introduction by book critic Brian Alderson, the book is an absolutely indispensable guide for all in the world of children’s books whether they be parents, teachers, librarians, booksellers or other authors and illustrators.

Here is Raymond Briggs on this book:
Here at last is a survey of the work of John Burningham, one of the greatest book illustrators of the century. John’s work is completely original, unlike anything before or since. It is unique. Written by the master himself, this book enables the reader to see hwo these extraordinary works came into being.

Footnote:
I shall treasure this glorious book for the rest of my life. Thank you John Burningham, and thank you Jonathan Cape. Please feel very proud of what you have achieved.
PS – John – great photo of you on outside back cover. Apart from having rather less hair, join the club, you look much the same as when I saw you last in Wellington all those years ago! And your work space looks something like mine, happily chaotic. I recall at that Wellington meeting you addressed you showed a slide of your home studio and I remember it was a bit of a shambles. Helen on the other hand rented a studio space away from home where she went after dropping the children at school and it was immaculate.
Posted by Beattie's Book Blog at 6:33 am

lovely thoughts on a writer whose work i also deeply admire,i relish the lightness of spirit and the underlying humour in Birminghams meticulously drawn illustrations. No other illustrator gives so much to a character in so few lines.

How lucky you were Bookman to have such great memories.The world of books is powerful, and at times, inspirational.
Thanks for the blog.