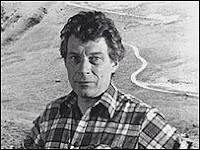 John Berger studied at the Chelsea School of Art
The archive of Booker prize-winner John Berger is to be transferred from his French home to the British Library.
Jamie Andrews, Head of Modern Literary Manuscripts at the library, will travel to the Alps to sort out Berger's papers - currently stored in an old stables.
"John has asked for some help with the hay harvesting while I'm over there," Mr Andrews said.
Berger won the Booker Prize in 1972 for his novel G. His other work includes Ways of Seeing and From A to X.
"John Berger's archive contains over 100 file boxes of drafts, scripts, reviews, and correspondence and I'm hoping to discover some surprises when I get there," Mr Andrews said.
Readers can follow Mr Andrews' journey on the British Library website or via the library's Twitter account.
The archive contains drafts of some of the 82-year-old's most famous works, including the recent Booker-nominated novel From A to X, Into Their Labours, and G.
Notes and drafts for his controversial first novel, A Painter Of Our Time, published in 1958, will also be included.
Mr Andrews will bring back the archive to the climate-controlled storage areas in the British Library's flagship St Pancras building in London.
Once catalogued, the archive will be accessible to researchers through the Library's reading rooms.
Posted by Beattie's Book Blog at 8:06 pm