Here’s a Clue: Mr. Kumar, With a Gun, in India
By JANET MASLIN writing in The New York Times, June 24, 2009
“Q&A,” the novel that became the basis for the smash-hit film “Slumdog Millionaire,” used questions from a television quiz show to prompt flashbacks about its main character’s life story. Here’s a question for its author, Vikas Swarup: Can a novel be any more high-concept than that?

Photo of Vikas Swarup Aparna Swarup
SIX SUSPECTS
By Vikas Swarup
470 pages. Minotaur Books. US$24.99.
Yes it can. Mr. Swarup’s second novel, “Six Suspects,” is a Bollywood version of the board game Clue with a strain of screwball comedy thrown in.
Its stock characters are easily identified: the Bureaucrat, the Actress, the Tribal, the Thief, the Politician and the American. Each attended the party at which a man named Vicky Rai, a playboy film producer, was murdered. Each has a gun and a motive. And although the story’s geographical span is even bigger than India, the whole thing feels handily confined to the kind of isolated, air-tight setting that Agatha Christie’s readers love. 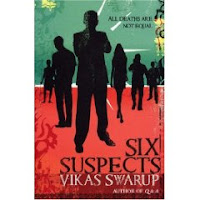 Thanks to such a schematic setup “Six Suspects” is gleeful, sneaky fun. But it’s also a much more freewheeling book than the format implies. Mr. Swarup, an Indian diplomat, brings a worldly range of attributes to his potentially simple story. And he winds up delivering a rambling critique of Indian culture, taking shots at everything from racism to reality TV. Yet Mr. Swarup’s style stays light and playful, preferring to err on the side of broad high jinks rather than high seriousness. A fizzy romp seems to be the main thing he has in mind.
Oddly enough, that ambition turns this formulaic-sounding book into a refreshing oddity. It bears no resemblance to any of the cookie-cutter genre books of this season. Its idiosyncrasy becomes apparent with the first of the six suspects, the Bureaucrat: Mohan Kumar, who was a man of power and influence until he hit forced retirement at 60. Thus adrift, he lets himself be coaxed to a séance at which the spirit of Gandhi is scheduled to appear. “I see dead people,” someone at the séance says with a snicker.
Janet Maslin's full review here.
Posted by Beattie's Book Blog at 7:55 pm