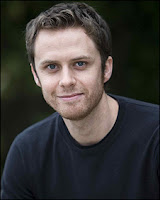 Edward Hogan has won the £10,000 Desmond Elliott Prize for his first novel Blackmoor.
The book, set in a fictional mining village in Hogan's home county of Derbyshire, was described by the judges as "dazzlingly well-written".
Established in honour of the late publisher and literary agent Desmond Elliott, the award honours debut novels published in the UK.
Hogan, 29, who lives in Brighton, spent seven years writing the book.
'Exceptional quality'. Now working on his second novel, Hogan said he started Blackmoor with no thoughts of ever being published.

Blackmoor centres around a small former mining community, a disturbed young woman, and a boy's determination to find out about his past.
Candida Lycett Green, chair of the judges, said: "In a shortlist of exceptional quality Blackmoor stands out.
"For a first novel it is both beautifully crafted and dazzlingly well-written. We are delighted that Edward Hogan has won the second Desmond Elliott Prize."
Posted by Beattie's Book Blog at 8:05 pm