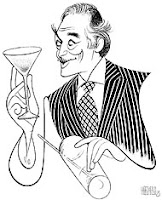 What a Night!
By ALEX WITCHEL writing in The New York Times,
Published: December 19, 2008
IN SPITE OF MYSELF
A Memoir
By Christopher Plummer
Illustrated. 648 pp. Alfred A. Knopf. $29.95
In the spring of 1997, soon after Christopher Plummer opened on Broadway in “Barrymore,” the one-man play based on the life of John Barry­more, I was at a dinner party with Al Hirschfeld, the great artist and caricaturist. Then 93, he had seen most of what had opened — and closed — on Broadway for most of the last century, so his fellow diners eagerly awaited his opinion of Plummer’s portrayal of the legendary actor.
“He’s a much better Barrymore than Barrymore,” Hirschfeld proclaimed. “Barrymore was so hammy!”
Hirschfeld was right, of course: Plummer won the Tony Award for best actor, and Ben Brantley of The New York Times wrote that he “confirms his reputation as the finest classical actor of North America.” 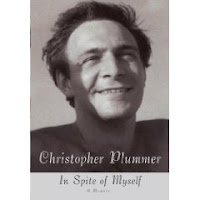 Now that Plummer has published “In Spite of Myself: A Memoir,” it is the most welcome of surprises to discover that this actor writes and reports almost as well as he acts. No kidding. To be sure, in his writing he is a bit hammy, often playing fast and loose with time frames, tone and details, not to mention exercising profligate use of exclamation points — the man thinks in soliloquies. But the result for anyone who loves, loves, loves the theater, not to mention the vanished New York of the 1950s and ’60s, is a finely observed, deeply felt (and deeply dishy) time-traveling escape worthy of a long stormy weekend. Just grab a quilt and a stack of pillows. No need for a delectable assortment of bonbons. They’re in the book.
Read the full review at the NYT online.
Posted by Beattie's Book Blog at 4:27 pm