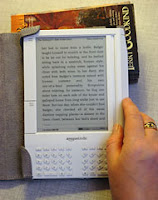 Turning Page, E-Books Start to Take Hold
By BRAD STONE and MOTOKO RICH, New York Times,
Published: December 23, 2008
Could book lovers finally be willing to switch from paper to pixels?
For a decade, consumers mostly ignored electronic book devices, which were often hard to use and offered few popular items to read. But this year, in part because of the popularity of Amazon.com’s wireless Kindle device, the e-book has started to take hold.
The $359 Kindle, which is slim, white and about the size of a trade paperback, was introduced a year ago. Although Amazon will not disclose sales figures, the Kindle has at least lived up to its name by creating broad interest in electronic books. Now it is out of stock and unavailable until February. Analysts credit Oprah Winfrey, who praised the Kindle on her show in October, and blame Amazon for poor holiday planning.
The shortage is providing an opening for Sony, which embarked on an intense publicity campaign for its Reader device during the gift-buying season. The stepped-up competition may represent a coming of age for the entire idea of reading longer texts on a portable digital device.
“The perception is that e-books have been around for 10 years and haven’t done anything,” said Steve Haber, president of Sony’s digital reading division. “But it’s happening now. This is really starting to take off.”
Read the full piece - NYT
Posted by Beattie's Book Blog at 7:00 am