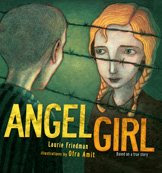 Publisher pulls children's book based on discredited Holocaust story
Last Updated: Tuesday, December 30, 2008 11:08 AM ET
CBC News
The publisher of a children's book inspired by a Holocaust survivor's now discredited love story is pulling the title from store shelves.
Lerner Publishing Group has announced it is recalling all copies of Angel Girl by Laurie Friedman from the market. The company has cancelled all future print runs of the title and will offer refunds on returned copies of the book.
Friedman's book, which was published by Lerner in the fall, was based on Herman Rosenblat's tale of meeting his future wife as a child while he was held at a concentration camp in Germany.
Over the past decade, the Miami man gained renown for his story: about how his wife lived on a farm nearby and helped sustain him with food passed through a fence.
According to Rosenblat, they eventually met again as adults in the U.S. and married. The couple's story was carried widely by press and led to two appearances on Oprah Winfrey's popular talk show and speaking engagements at various literary and Holocaust-themed events.
On the weekend, Rosenblat said that while he had indeed been imprisoned in a concentration camp during the Second World War, he admitted fabricating the story about meeting his wife during that time.
Lerner president and publisher Adam Lerner and Angel Girl author Friedman expressed their disappointment at the fabrication in a statement issued Tuesday.
"While this tragic event in world history needs to be taught to children, it is imperative that it is done so in a factual way that doesn't sacrifice veracity for emotional impact," Lerner said.
"We have been misled by the Rosenblats, who gave us and our author what we believed to be an authentic and moving account of their lives."
Read the complete story at CBC Canada
Posted by Beattie's Book Blog at 7:07 am