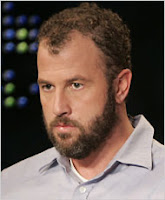 James Frey to write 'third book of the Bible'
Alison Flood writing in guardian.co.uk, Tuesday 16 December 2008
James Frey is moving on from his drugs and booze-soaked memoirs to write the third book of the Bible, in which his version of Jesus will perform gay marriages.
Talking to online magazine The Rumpus.net, Frey said he had just finished an outline for the book, and was about to start writing it. "It's the third book of the Bible, called The Final Testament of the Holy Bible," he told interviewer and fellow author Stephen Elliott. "My idea of what the Messiah would be like if he were walking the streets of New York today. What would he believe? What would he preach? How would he live? With who?"
Frey's latest choice of subject matter sees him following in the footsteps of Jeffrey Archer, who last year penned The Gospel According to Judas, which told the story of Jesus through the eyes of Judas. Earlier this year The Crimson Petal and the White author Michel Faber published The Fire Gospel, in which a scholar discovers a fifth gospel in a bombed Iraqi musuem which reveals that Jesus's last words were "please, somebody, please finish me".
Frey said his version would see Jesus living with a prostitute. "It doesn't matter how or who you love. I don't believe the messiah would condemn gay men and women," he said. Judas, meanwhile, would be the "same as he was two thousand years ago", a "selfish man who thinks of himself before the good of humanity, who values money more than love".
Alison Flood's full piece at The Guardian online.
Posted by Beattie's Book Blog at 7:10 am