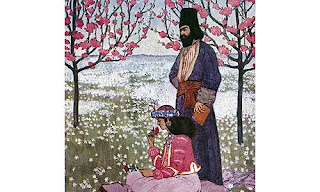 Poem of the week: The Rubáiyát of Omar Khayyám
If only we could all learn the spirit of Edward FitzGerald's wonderfully unfaithful translation
An early-20th-century illustration of The Rubáiyát of Omar Khayyám. Photograph: Corbis
The coming year is the 200th anniversary of the birth of Edward FitzGerald; so, as the year turns, what better celebration than some stanzas from his great meditation on life's transience, The Rubáiyát of Omar Khayyám?
FitzGerald was a friend of Thackeray and Tennyson, but initially had few writerly ambitions of his own. Scruffy, eccentric, a bit of recluse and very rich, he was drawn to younger men, and it was from one of these, Edward Cowell, he began learning Persian in 1853. Cowell also passed on his discovery in the Bodleian Library, Oxford, of verses written by Khayyám, a Persian polymath whose life spanned the 11th and 12th centuries. FitzGerald was enthralled and declared that the poems had "the ring of true metal".
The Princeton Encyclopedia of Poetry and Poetics quotes the tradition that the Persian quatrain-form, the ruba'i, originated in the gleeful shouts of a child, overheard and imitated by a passing poet. "Succinctness, spontaneity and wit" are its essence, the encyclopaedist writes, coolly noting FitzGerald's "venial infidelity to his Persian model". FitzGerald got the rhyme-scheme right but missed the rhythmic subtlety of the original prosodic pattern; some of the quatrains are paraphrased, some mashed together, others invented. Furthermore, Khayyám's 750-plus quatrains certainly did not constitute one long poem.
The 101-verse semi-narrative FitzGerald finally assembled is the product of a ruthless editorial job – but how much poorer English poetry would be without it. His endeavour might more generously be termed "transcreation". Khayyám, an agnostic famed during his lifetime as a mathematician and astronomer rather than a poet, and his mediator, a nineteenth-century English sceptic who believed that "science unrolls a greater epic than the Iliad", may not meet in a true linguistic union, but there seems to be a "marriage of true minds" nevertheless (and, yes, you'll note a passing trace of Shakespeare in FitzGerald's diction).
71
The Moving Finger writes;and, having writ,
Moves on: nor all your Piety nor Wit
Shall lure it back to cancel half a Line,
Nor all your Tears wash out a Word of it.
For more comment and more verse link to the Guardian online.
Posted by Beattie's Book Blog at 7:26 am