Douglas Keen: Businessman whose Ladybird Books
revolutionised children's publishing
The Independent, Wednesday, 17 December 2008
Douglas Keen, the driving spirit behind Ladybird Books, was a publishing v0isionary and an inspired businessman. In the years following the Second World War, under his editorial direction, the series of children's books became a household name. The Ladybird Key Words Reading Scheme alone sold 85 million copies, making Keen an important figure in promoting children's literacy.
Keen was born in Cheltenham in 1913. His father was a market gardener who left the family while his son was still a small boy and Douglas's mother then worked as a home-based dressmaker to support them. For the rest of his life, Keen valued education as a way out of poverty. He won a scholarship to Pate's Grammar School, Cheltenham, and went on to study commercial art at evening classes. This led to a job in advertising as a sign-writer.

In 1936, at the age of 23, Keen moved to Wills & Hepworth, a printing firm based in Loughborough that produced catalogues in the West Midlands and whose clients included the car manufacturers Austin and Rover. It also published a small stock of children's books; they were printed on cheap paper and were produced mainly to use up "machine time" between larger commercial commissions.
In 1940 Keen was called up to the RAF. He worked with a mobile radar unit throughout the war. In 1946, he returned to work for Wills & Hepworth, in the firm's Birmingham office. From 1941, the firm had begun to experiment with children's fiction and picture books in a small format that was easy for young readers to manage on their own. But these early "Ladybirds", cheaply printed on one sheet of paper, were operating in a market that had never been properly analysed. Keen visited shops and schools over a wide area and concluded that while books to be read for pleasure always aimed to look as attractive as possible, educational books, with their soft covers and dreary two-colour line illustrations, lagged behind.

And so it was that Keen hit upon the idea of producing short, lavishly illustrated, properly researched, hard-cover factual books on approachable subjects, small enough to fit into a child's Christmas stocking. Unable to convince his managers, he went ahead with his own mock-up of British Birds and their Nests to demonstrate what he had in mind. He wrote the text and the book was illustrated with water-colours by his mother-in-law, a trained artist, and drawings by his wife, Margaret, whom he had married in 1941.

The prototype won over Wills & Hepworth's chairman, Jim Clegg, and Keen was given the go-ahead for the book. He commissioned Brian Vesey-Fitzgerald to provide the text and Allen Seaby the pictures. The result was a 52-page book with 24 f 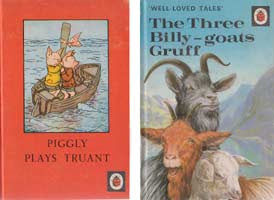 ull-page colour illustrations; its cover showed a kingfisher in full plumage perched on a branch. The final version of British Birds and their Nests appeared in 1953 and sales were excellent; a second print-run of 50,000 followed almost immediately and the great days of Ladybird Books had arrived.

The full obituary at The Independent online.