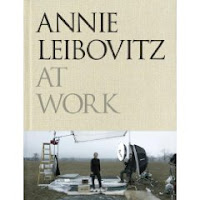 ANNIE LEIBOVITZ AT WORK
By THOMAS MALLON ,writing in The New York Times Published: December 12, 2008
In one of her many meditations on the taking of pictures, Susan Sontag wrote that “all photographs aspire to the condition of being memorable — that is, unforgettable.” Annie Leibovitz, Sontag’s lover before her death in 2004, says she doesn’t really “have a single favorite photograph” among those she’s taken; it’s her body of work, its “accumulation,” that gives her the most satisfaction. And yet “Annie Leibovitz at Work,” the latest of her books, makes a viewer realize how many of Leibovitz’s pictures have managed, individually, to fulfill the egoistic aspiration Sontag ascribed to all photographs.

ANNIE LEIBOVITZ AT WORK
By Annie Leibovitz
237 pp. Random House. US $40 (NZ$76.99)
Modestly proportioned, this new book is trim-sized more for the nightstand than the coffee table. Its photos are generally reproduced on a smaller scale than they were during their first appearances in splashy venues like Vanity Fair. The text, part memoir, part casual manifesto, is conveyed in an unpretentious, sometimes even choppy, style — “Athletes are proud of their bodies. They’ve worked very hard on them” — that derives from its being “based on conversations” between Leibovitz and her editor, Sharon DeLano.
If the more general observations about photography in “At Work” don’t surprise, they do convince. They’re delivered by induction, set against the particular photos that taught Leibovitz her lessons. Among them: the camera really does love some people more than others; not just leggy Nicole Kidman but “gaunt, sinister” William Burroughs. When doing sports photography, “if you see the picture through the viewfinder, you’re too late.” (She got the hurdle, but not Edwin Moses.)
Leibovitz is “not nostalgic about cameras” or even film, but “At Work” does display a kind of wistfulness for much of what she got to see over the last 40 years, and even for some of what she just missed, like the Paris fashion shows of the 1960s, where “photographers and editors stayed up working around the clock and everyone got drunk and crazy and wild.” (Leibovitz did, it should be noted, get to go on tour with the Rolling Stones.) The author clings to a belief, reinforced by shooting the O. J. Simpson trial and its raucous surroundings, that still photographs, which invite contemplation, can even now compete with “the barrage of images on television.” (Being nearly as famous as some of her subjects hasn’t hurt Leibovitz: Judge Lance Ito, a fan, gave her special access to his courtroom.)
Read the full review here.
Posted by Beattie's Book Blog at 9:02 am