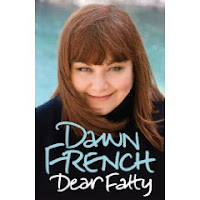 Celebrities left on shelf at Waterstone's
• Sales down on last year at Britain's biggest book store• HMV records 23% leap in online transactions
Simon Bowers and Helen Pidd writing in The Guardian, Friday 12 December 2008
Waterstone's, Britain's biggest book store, has warned it could be left with piles of unsold celebrity autobiographies and cook books in the new year unless sales pick up sharply in the next two weeks.
Seasonal hardback memoirs such as Dawn French's Dear Fatty and That's Another Story by Julie Walters continue to be among festive season best sellers. But Simon Fox, chief executive of HMV Group, which owns Waterstone's, said sales of such titles were lagging behind last year at its 313 book stores.
Fox said that reflected widespread slowing in consumer confidence. Some experts have predicted high street shopper numbers will be down 7.5% in December.
However other booksellers yesterday insisted they had not seen the trends identified by Fox.
A spokesman for Asda, where book sales are much more reliant on blockbuster non-fiction titles, said: "Our celebrity books are going very well. [Autobiographies from] Alan Carr and Paul O'Grady have been good for us."
For the full story link here.
Posted by Beattie's Book Blog at 4:02 pm