Those of us who have the joy and privilege of living on or around the Hauraki Gulf are being well treated this year. This is the second title in a month on the subject of our beloved Gulf.
I reviewed the earlier title, Hauraki Gulf by Ian Robinson (Bateman) on 28 November.
This second book differs in that it is more of a handsome handbook or guide rather than the earlier larger-formatted principally pictorial book. I’m afraid to say that if you are a lover of the Hauraki Gulf you are going to have to own both!

Here is how Linda Bercusson starts her excellent introduction:

Kiwi historian Keith Sinclair wrote:
,…, the authentic Auckland experience is a summer’s day on a beach watching the yachts heading past Rangitoto. It is paddling a canoe up Meola Creek and landing on the reef and cooking fish on the rocks….(it is) landing on an uninhabited island and empty beach. It is Regatta day – with more yachts than Sydney’s. That is what nostalgic Aucklanders think of in London’s damp and cold. The sun on their skin.

For me it’s jumping into clear water after a hard walk, islands, wild isolation, birds, bush; and its vineyards, olive groves, jazz festivals and food markets providing a civilized counterpoint.
It’s no surprise that one in three Auckland households owns a boat. The reason is the Hauraki Gulf – Tikapa Moana, a brilliant maritime playground right on the ccity’s doorstep. It’s easy to feel like a millionaire as you laze at the end of a fishing line or stretch out on a white, sandy beach, only the foot prints of gulls mingling with you own.
B

ercussson puts it so well, as she does throughout the book which I guess is not surprising as she was with the Department of Conservation for many years as a journalist and now is busy as a freelance writer and project manager in Auckland.

In this greatly appealing and well illustrated book (over 200 photos) there is information on the Gulf’s islands, regional parks, marine reserves and mainland beaches as well as the Gulf’s plants, animals, marine life, geology and human history, and 16 Bird’s Eye maps of the islands and mainland coast. 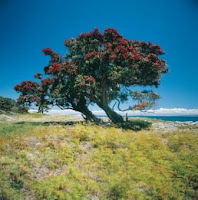 If you are holidaying in, on or around the Hauraki Gulf this sum

mer, don’t leave home without it.
Posted by Beattie's Book Blog at 8:03 am