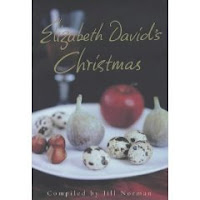 Good for the Goose: An English Christmas

By FLORENCE FABRICANT wqriting in The New York Times, Published: December 16, 2008
ELIZABETH DAVID was no Charles Dickens. She was not a champion of the English holiday table, even though she was perhaps the most influential English food writer of the 20th century.
When she began writing, after World War II, there was little joy in English food. She found her muse in the sunny lands of the Mediterranean, and gained fame and devotion by introducing the English to dishes from those countries.
So in “Elizabeth David’s Christmas,” edited by Jill Norman (David R. Godine, 2008; $25.95), she is as likely to express her preference for a Christmas feast of smoked salmon and a glass of Alsatian wine as she is to describe holidays with her family in England.
The book was first published in England in 2003 and this edition was re-edited for an American audience. It was compiled by Ms. Norman, Ms. David’s friend and the literary executor of her estate, from a box of materials marked “Christmas” that she found after Ms. David’s death in 1992. (The back cover uses a quotation, not about this book, from an article about Ms. David that I wrote for another publication many years ago.)
In recipe after recipe, Ms. David looks to France, Italy, Spain and even North Africa for inspiration. Avocados, hard-cooked eggs with mayonnaise, and pâtés start the meal. Potted meats are about as English as it gets.
Read the full report here.
FOOTNOTE
When I first visited Penguin Books UK in the late 70's Jill Norman was the cookery books editor and Elizabth David was Penguin's biggest selling cookery writer. I had not previously heard of Elizabeth David but quickly became an admirer and have a number of her books.
Remarkably this book has the same cover on both sides of the Atlantic.
Elizabeth David died in 1992, about nine of her titles are still in print.
Posted by Beattie's Book Blog at 9:08 pm

i luv ur blog. it is at the top of my roll.
thnx.
-spencer
blog.spencerlord.com