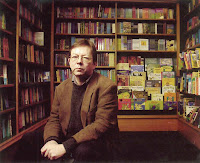 UBS OTAGO VETERAN BILL NOBLE LOOKS BACK, AND FORWARD
The following interview appeared in the latest issue of Booksellers News and is reproduced here with their permission.

After three decades at the helm of one of this country’s leading bookshops, Bill Noble is something of a book selling institution. His name is a byword for standards some would see as sadly lacking in the modern ‘product’ first environment. He has a team of 23 and estimates turnover at 15 times the level of when he first started. Booksellers News has a peek behind the covers.

A Canadian with 35 years here: how did that come about?
I was born and raised in Winnipeg, Canada, and lived for a couple of years in Vancouver, before going to Auckland in the early 70s for a one-year working holiday which has been extended indefinitely. While in Vancouver I worked for the legendary Duthie Books, an operation on which I've modelled pretty much everything I have done in bookselling since.

How and why did you end up in Dunedin and working in the University Book Shop?
I had been working as buyer for UBS Auckland when the Otago manager's job came up in 1978. I had reservations about leaving Auckland, which I love to this day, but I was assured by various book industry leaders that three or four years at UBS Otago would be great for my CV, and that then I could come back north and get something flash in publishing. Marriage, fatherhood, and a fairly intense personal identification with UBS Otago combined to keep me here a bit longer.

What was it like then? What are your memories of Otago at that time?
Apart from UBS, there were half a dozen independent booksellers of quality and individuality in Dunedin, plus a Whitcoulls which was impressive in an old-fashioned way. We are the only one of those independents still operating.
Except for the University area, Dunedin is, remarkably, much as I found it in 1978. More cafes, bars and restaurants, of course, but the human scale of things, and the sane pace of life have endured. The University was much smaller then (c. 7000 students then versus c. 18000 now), and much more dominated by the humanities. Virtually free of tuition fees, students had the luxury of involving themselves in political issues and causes other than those directly affecting their own financial situation. Also, they mixed socially with the resident community more easily: the Captain Cook Tavern was home away from home for an eclectic mix of students, faculty, writers, artists and musicians, well-educated beneficiaries, criminals, and even the odd bookseller. Now it's strictly a place for the under-22s to get %$*&-faced and worse, as efficiently as possible.

UBS was and is quite unique in many ways. What are its key ‘points of difference’? Give us an idea of some of the major changes over the decades and how the bookstore accommodated them?
Until some time around 1990, the NZ book market was very much part of the British market. Before my time, and increasingly after I arrived, UBS Otago strove for a more American look and feel, through direct importing. We were known for having US titles in stock months or even years before they filtered through to the mainstream New Zealand market via the British publishers.
The UK/US divide has since largely disappeared, so I suppose our uniqueness now is derived from our size and range (large for a city of Dunedin's population), our continuing commitment to the best backlist of the last two or three millennia, and our abiding desire not just to follow our customers, but to lead and even challenge them. If we sell just one copy of something quirky, or important, or just plain gorgeous, that our competitors have ignored, we are as happy as we are selling pallet-loads of Harry Potter. Also, we remain unique in the Dunedin context simply for having survived.

What condition do you think the book selling sector is in today?
Things are tighter for us right now than they have been at any time in my memory, but I understand things are much worse for the trade in general. I would guess that those independents in the worst shape are those who have tried to make like the chains – ‘retailing’ as opposed to bookselling. Even the chains don't do this very well, and if you don't have at least their advantages of scale and location, heaven help you.
One plus for us and, I assume, the trade as a whole, has been the burgeoning - in both quantity and quality - of New Zealand publishing over the last 10 or 15 years. Most of our blockbusters these days are locally published, and very, very little local material winds up in our clearance shop.

What impact is the electronic medium having on the industry? What does the future hold for books and for booksellers?
The fact that we have airplanes doesn't mean the wheel is obsolete. I don't see the e-book or its successors killing the printed book the way that CDs killed vinyl and tape. I think we will find that there are some things the e-book may do better (for instance, reference, how-to, and academic/scientific interchange at the top level) but the book as we know it will survive and thrive for those disciplines with an emotional, artistic, or spiritual dimension. It is a pleasing and sympathetic object in and of itself.

After 30 years at the coal face of book retailing, what does the future hold for Bill Noble?
I don't see myself working elsewhere in the industry after my time here at UBS, which, I hope, has a few years to run. My current retirement plan is to move to Sydney and sponge off my daughter, assuming she has become rich and famous by then.

What makes a good bookseller?
I have a useful little mental exercise, which is to imagine our shop airlifted and plonked down in the middle of New York or London. Would we be embarrassed? The answer needs to be no.
Fortunately we have enough happy customers visiting from those places to reassure us that it is. Working from a prescribed bottom line up doesn't work - certainly not long-term. Along the way it's boring, sometimes nasty, and benefits no-one. If you concentrate instead on being a high quality cultural/social amenity to your community and a good employer, while being financially prudent, the profit should follow, as will the pride.
FOOTNOTE
Last year southern poet Brian Turner, a longtime customer of UBS Otago, paid tribute to Bill in a Listener article which you can read by linking here.

Ah, UBS, my second home and a place I often visit just to breathe the air and chat to the staff. I have even been known to get out of the door without buying something, but not often.

One of the unfortunate things of having UBS as my local is that it is the standard by which I judge all book shops, and to be honest, I haven't found one better.

Bill and his staff are to be congratulated on creating a book haven that has every thing you want, and many things you didn't know you wanted until you discovered them.

Am I gushing too much? I think not.

No Vanya, you are not gushing too much at all. What you say is considered and UBS deserve the praise you extend.
The Bookman is currently preparing a story for the New Year on NZ's best independent booshops, their value and importance to their communities.
I would love to hear from anyone who wishes to recommend/commend/comment on individual stores.

Bill and I worked together at Hodders in the early
70s when he first came to New Zealand and found a job in the warehouse in Cook street?